2016 is the year of brunches for me as I have been hitting up several brunch spots over the first quarter of the year! At the end of February, I was invited to check out the Get Cooking Brunch Pop-Up series and *spoiler alert* it was a delectable feast! My pal Nancy and I rolled in to the Get Cooking studios and were seated at a communal table with several others and (soon) greeted with never ending cups of coffee. One thing that I really loved was the attention to detail and care as the Get Cooking team used locally roasted Iconoclast coffee (in a French press no less!) and offered containers of warm milk for your coffee… I don’t even do that at home!

Brunch setting with a (soon to be) never empty coffee cup

In addition to the coffee, there were these bowls filled with beautifully baked bread… Even though I knew there would be a lot of food coming, I couldn’t resist the carb-y goodness in front of me and had a slice or two… possibly three?

Bread… so much bread

Speaking of carbs, these scones made by the Get Cooking team were so so good. They play with different flavours every brunch, but I zoned out once I heard there were homemade scone and forgot to write down this pop-up’s flavour (sorry friends!). These were served with saskatoon berry jam and whipped cream – the whipped cream was so much better than the kind I make using grocery store cream and I think this is the difference between using a super good quality whipping cream versus the regular stuff in store. These scones were so delightful and a great “official” start to brunch! 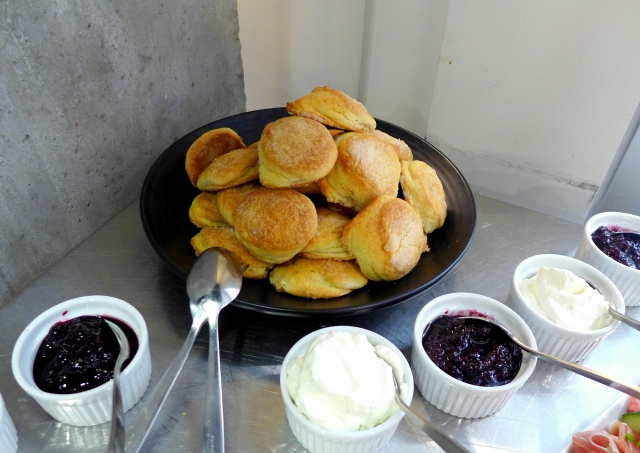 Apparently European style brunches, which the Get Cooking brunch is modeled after also starts with charcuterie – and the Get Cooking team certainly did not skimp on the meat and cheese! I love charcuterie and this did not disappoint with the smoked duck being the highlight of the board for me. 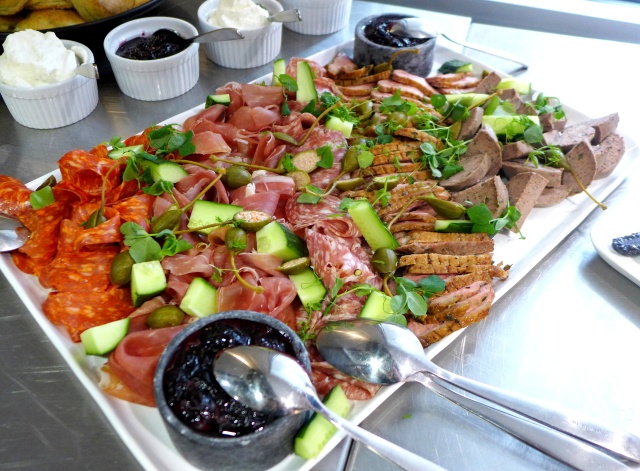 Charcuterie board with liverwurst, duck, and an assortment of cured meats 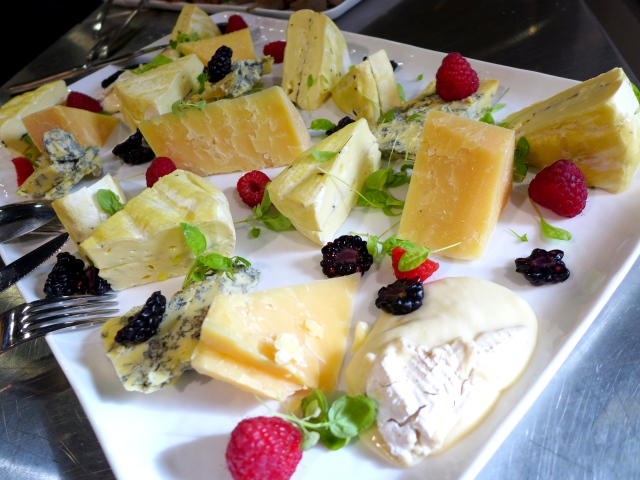 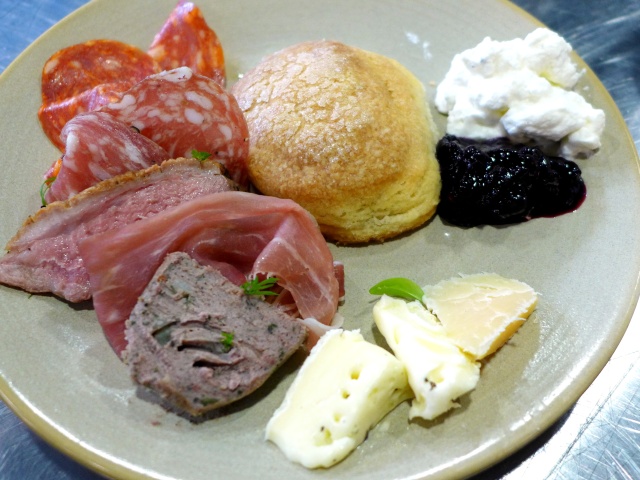 Starting “small” with a taste of everything…

In addition to the coffee, Get Cooking also dished up a brunch cocktail made with pineapple infused rum, almond syrup, sumac, cucumber, mint and berries. There was a large punch bowl placed on the table, but unfortunately, there wasn’t quite enough for everyone to get a full glass. Our end of the table had a little bit less but it was probably not a bad thing as this cocktail was quite strong – that or we just didn’t give the bowl a good enough stir. The flavours of the cocktail were very garden party like, which worked very well for brunch.

Following the cold dishes/buffet of scones and charcuterie, Chef Doreen Prei started dishing out the hot dishes and this first dish was an eye-opening one for me. I am not usually a fan of oatmeal and/or steel cut oats as I find the texture not to my liking, but Chef Doreen definitely changed my mind. The Gold Forest Grains steel cut oats with pistachios, blueberries, sauteed chorizo topped with whipped cream and chorizo oil had so many different textures and flavours that I couldn’t stop eating it. The idea of chorizo and whipped cream seems kind of weird but when you mix everything together into a single bite, it was savory and slightly sweet and just an explosion of flavour! 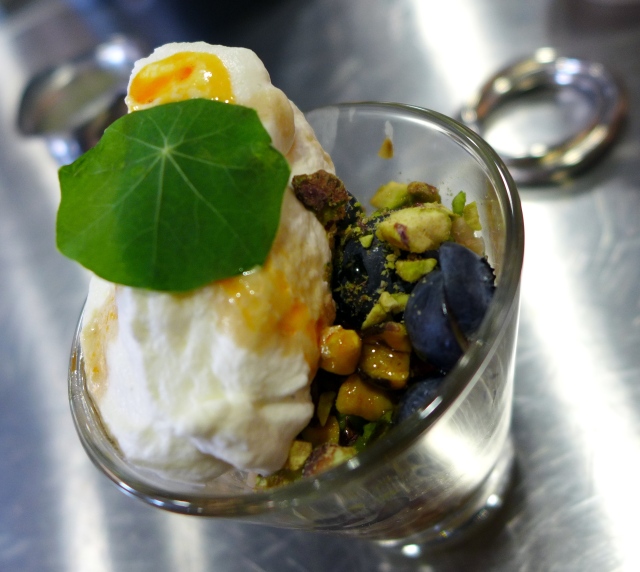 Immediately following the steel cut oats were the ricotta fritters with a tomato and orange sauce. I usually find fritters to be hit or miss, depending on the occasion, but these ricotta fritters were pillowy soft and when paired with the tangy sauce, they were perfect little bites.

Ricotta Fritters with a Tomato and Orange Sauce

The next dish included my nemesis – the poached egg… full disclosure here – I did not eat the beautifully poached egg, but rather passed it on to Nancy after I snapped some photos and a video for snapchat. Nancy really liked the egg and the egg yolk was runny, which is what you would like to see with what is essentially an eggs benny. The grated potatoes and smoked salmon (from local company Sgambaro’s Seafood) were delicious with the bernaise sauce.

The final savory dish on deck was a flank steak (marinated in beer) with a German bread dumpling with rapini, mushrooms and truffle. When I think steak and brunch, I usually think of the huge lumberjack type breakfast, but this was much more refined and cooked beautifully. My favorite part though was the German bread dumpling… that would be my love of carbs speaking. 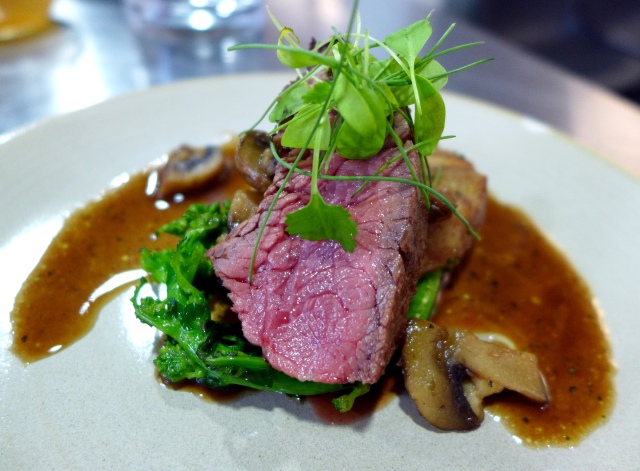 Flank Steak (marinated in beer) with a German bread dumpling with rapini, mushrooms and truffle

I was feeling pretty full (who wouldn’t be?) by now, but then Chef Doreen started plating dessert and I never say no to dessert. The fried brioche dusted with lavender sugar, white chocolate and elderflower parfait with a chocolate chili sauce were a phenomenal ending to brunch. These hit the right balance of sweetness as the chocolate sauce was a dark chocolate with a hint of heat and the berries with the elderflower parfait were the right mix of sweet and tart.

Overall, I had an amazing time at the Get Cooking brunch and I could not recommend it enough. The Get Cooking team is fantastic and there to make your experience great – they were always ready to offer more coffee and tea, stop and explain the dishes, offer to have people come up and see what Chef Doreen was cooking and answer any and all questions diners had about the dishes. The brunches probably seat around 20 or so people (at least that was what the set up was when we were there), although I think the room could be configured for more if needed? The set up we had allowed us to chat with our fellow diners, and this is where I met fellow blogger Athena (aka The Salty Almond), so that was very nice!

The Get Cooking brunches are on Saturdays at the Get Cooking studio and ticket prices are $45 per adult, $22.50 for children between the ages of 7 and 13, and free for children 6 and under. The brunch fee includes coffee/tea, a welcome cocktail, three hot entrees, a cold table, and dessert, which I think it quite reasonable for what you get. I don’t think you will be disappointed if it is anything like my February experience!

The next brunch is on April 16 and there are still spaces available, but the May session is completely sold out, so I would recommend getting yourself a space while you can. You can keep an eye out on the Get Cooking calendar for the brunch pop-ups and purchase tickets via the website as well.

Disclosure: I was invited to the Get Cooking Brunch by Get Cooking and our brunch was complimentary. I was not expected to write a blog post in exchange for our meal and all opinions remain my own.

Despite my social hibernation this month, I have taken some time to meet up with some friends and lengthy brunches have been on the agenda. Cured Wine Bar recently started offering brunch and my fellow food loving friend Cindy rounded a bunch of the “food friends” up to go for brunch (her review is already up!). Cured Wine Bar is located in Ellerslie and I have to admit, my preference is usually to head out to the city centre instead of the suburbs, but for good food, I am willing to make the drive.

END_OF_DOCUMENT_TOKEN_TO_BE_REPLACED

I have been meaning to get myself down to The Makk on 124 Street ever since they opened but I am a procrastinator and never got around to doing it – it even took months to pick up a gift certificate I won from them over twitter. However, I finally managed to go and have a meal at The Makk last week, mainly because my gift certificate was going to expire at the end of May. I really like breakfast/brunch foods, but I normally never wake up early enough to beat the lines, so it was great that The Makk does take reservations (no line!) and A was willing to come down with me. The Makk had just changed their brunch menu, so A and I were fortunate enough to be one of the first few people to sample items on the menu.

When I arrived at The Makk at 11, which is heading more towards lunch than brunch, I was shocked that there was almost no one there. I don’t know if this is reflective of the Edmonton brunching culture (do Edmontonians not like brunch?) or if not many people know The Makk offers a Sunday brunch? Anyways, the first thing on my agenda was coffee and lots of it – throughout our entire meal, my coffee cup was always full, which equals huge points in my book. 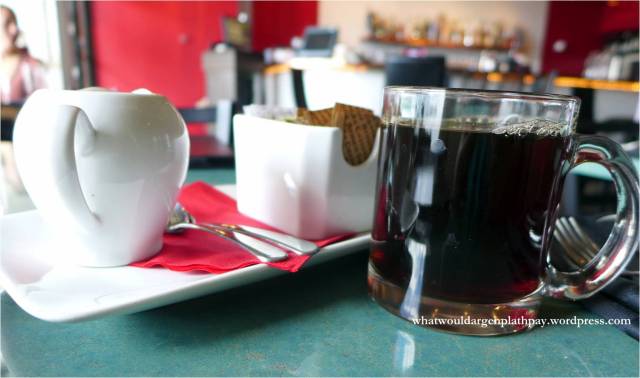 Coffee at The Makk