Father’s day in the Argenplath family isn’t a huge deal – we don’t normally do anything too special except maybe have a slightly more seafood-y dinner at home. It’s hard to eat out with my parents sometimes because Argenplath Mama is a pretty good cook (I don’t know why I am not so good – probably spoiled by her cooking) and we always end up having the “I could do a better job” conversation in the car afterwards, so instead she goes out and buys a lobster and/or other seafood and whips up dinner. This year for Father’s Day we did have lobster but I wasn’t around to catch all the ingredients and measurements that went into the coconut cream sauce. It was delicious though! 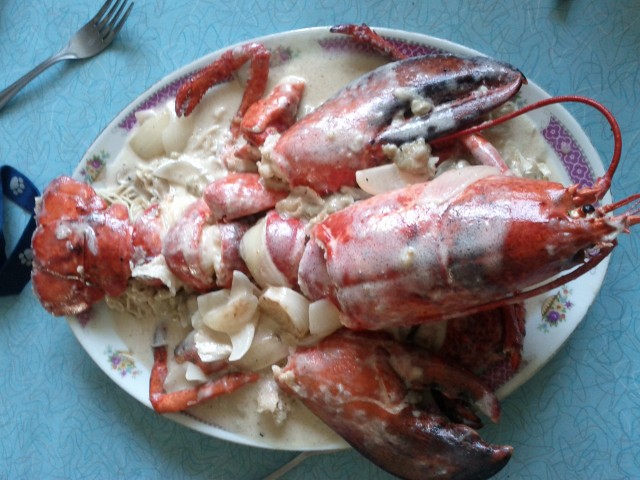 Lobster in coconut cream sauce (One day I will get the Argenplath Mama recipe!)

END_OF_DOCUMENT_TOKEN_TO_BE_REPLACED

Spring might be in the air – I can’t be sure though since we had an April snow storm on Wednesday night/Thursday morning, but everything melted really quickly and the sun is back out now. Of course not before I grabbed some “snow day” photos and made myself a little army of snowmen.

Snowy morning and a few members of the snowman army (Earl, Junior & Bradley)

END_OF_DOCUMENT_TOKEN_TO_BE_REPLACED

I have been on a dumplings kick ever since the idea of #yegdumplings night popped up over twitter – who doesn’t love stuff stuffed into a wrapper of some sort? The idea was that everyone would produce a dumpling and bring it along to the party, but once the plan changed to bring a dumpling per two people, I convinced my pal A. to come to the party and do most of the work as we made vareniky (vereniki? spelling is apparently country dependent). Good times were had at the dumplings party hosted by Carmen over at Food Karma Blog and I was way too busy eating delicious dumplings to remember to take photos. Luckily, Carmen has a great summary post of the night so I direct you over to her blog to check out the action.

So why am I posting about dumplings when it sounds like I didn’t do much but hang out and eat? Because prior to the aforementioned plan change, I thought I would have to bring my own dumplings and bringing frozen pre-made dumplings to a foodie party probably guarantees never getting invited again. So as a non-cooking type person (knives and flame – essential to the cooking process but oh so scary to me), I had to scramble and figure out how on earth you make a (good tasting) dumpling? That is where my Mom comes in (what a good sport she is) – I demanded we make dumplings so I could learn and create semi-exact measurements for the future (a little of this is not very exact!). So without further adieu, I present to you: