Hey friends! I am still here and kind of around… Even though we all know that I am not one of the most consistent bloggers out there (ha!), I do try to keep up on social media and I am just going to say it now – school is killing me on all the social media fronts! Somehow, I decided that completing all my classes by April (just in time for June graduation) was a good idea and I am taking seven classes this semester. Past me was obviously more energetic than current me! One of the upsides and downsides to doing a MBA program is the tremendous amount of group work that happens. The perks are working with insanely fun and bright people, but the downside is definitely trying to coordinate the schedules of 5 people – I have had meetings at 9:30pm and that makes me a sad panda… The only thing that makes group meetings fun would be snacks and coffee (lots and lots of coffee!), so luckily for me (and my group), Canova Pasticceria reached out to share their story and they offered to put together a pastry tray for our MBA group so that we could see what they’re about and to provide feedback on their products.

I had seen a few tweets about Canova just prior to hearing from them, but the best endorsement I heard before giving them a try myself was from my pal A. The two of us have a major love of croissants and really all baked goods, and she messaged me one day saying that she had a beyond delicious croissant and that I needed to try it – it turns out her new discovery was a Canova croissant!

On the day of our group meeting, I drove out to Canova, which is tucked by the train yard just north of Yellowhead Trail. There isn’t a huge amount of signage, but Google Maps will get you there as long as you don’t doubt it. I was greeted by Carla Roppo, the owner of Canova Pasticceria and three different size trays filled with goodies, which was more than enough to feed our group (and some for my family), but also a number of my classmates as well. The packaging is fantastic and so pretty – it was also very practical for carrying the goodies to and from the car.

So what delicious pastries were awaiting within the boxes? Well… have a look for yourselves.

For the sake of my photo, I only showed a single item of each variety above, but there were several of most items, especially the croissant, cornetti and danishes. At first blush, I think you can see that everything is beautiful, but the most amazing thing about this was the rich buttery smell when you opened the box. Canova uses high quality ingredients in their products like 83% New Zealand butter, fresh vanilla, whole milk and eggs and it is all baked in small batches – the quality really comes through when you bite into these!

I didn’t get a chance to try everything, but out of the pumpkin loaf tray, I tried the pumpkin loaf and the almond cookies. My family got to the nutella brownie before I could and it was with deep regret that I missed out on that opportunity. The pumpkin loaf was very moist and had great pumpkin flavour – it was perfect as we transitioned from summer to fall. The almond cookies are gluten free and were a hit with everyone who had one. I can’t quite describe the texture except to say it had a nice chew. 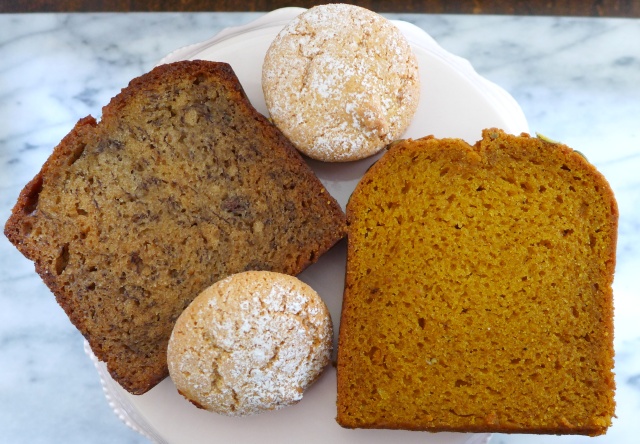 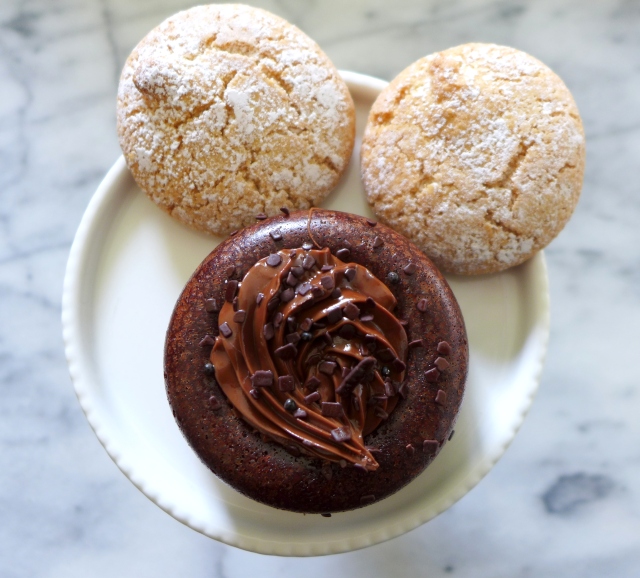 Who can say no to those treats? Well… I did, but only because I saw what else Carla and the Canova Pasticceria crew had in store for us. The vanilla cornetti was one of the best things I have eaten in a while. The pastry was flaky and the vanilla bean pastry cream was full of vanilla flavour and was just luscious and so so good. If I had to pick one pastry – it would be the cornetti hands down. The nutella croissant was a huge hit with my classmates and the general consensus was that it was awesome. There was so much nutella in the croissant that it was oozing out every time you took a bite. The two danishes were also a win as my family devoured them before I even got a chance to taste them! 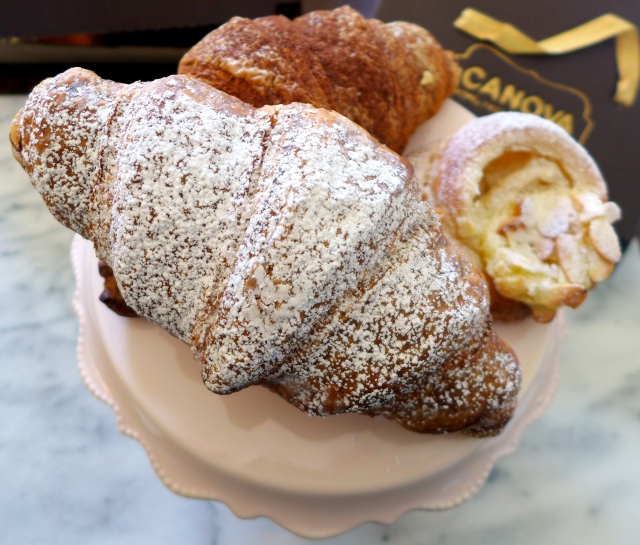 In addition to the pastries, Canova also hooked me up with some of their packaged goods – – biscotti and their gemelli fruit and nut bars made with biscotti crumbs. Let’s say that one more time… biscotti crumbs – what a great idea! The biscotti is fantastic with a morning cup of coffee and the gemelli bars are a delicious alternative to a granola bar, although they are also a little higher in calories as well. But I am definitely willing to take one for the team and I sampled both products on your behalf friends – they were very good. The biscotti is available at L’Express in the Student’s Union Building on campus, and I heard that they occasionally have pastries as well. NAIT’s corner shop in their new Centre for Applied Technology Building is also home to Canova pastries, so post-secondary students, you’re in a good place to indulge! Of course, if you’re not a student, you can also find Canova packaged products at Sobey’s, Sunterra and Save On Foods.

I don’t have a price breakdown for y’all, but I have seen the prices for the pastries at the NAIT corner shop coming in at around $2.75 each, which I think is quite reasonable considering how much other outlets charge for their pastries and those are not nearly as good! So, if you’re on the hunt for meeting snacks or a dessert tray for an event or just because, I would definitely recommend stopping at Canova Pasticceria!

Disclaimer: Canova Pasticceria provided the pastries and packaged products for my review, however, I was not compensated in any other way. All opinions on the products remain my own.