Living in a landlocked province is one of the hardest things for someone who loves seafood… Whenever I get near a city close to the ocean – I gorge myself on all the seafood available. However, that’s not to say that we don’t get any seafood here in Edmonton, but I just find it occasionally “meh”, so I am always excited to hear friends rave about seafood-centric places that are close to home. Black Pearl Seafood Bar has been open for awhile now, but I haven’t been able to find the time to go until recently. A few friends and I decided to pre-snack before heading to the Yelp Edmonton Museum After Dark party a couple weeks ago and boy am I glad we went to Black Pearl! 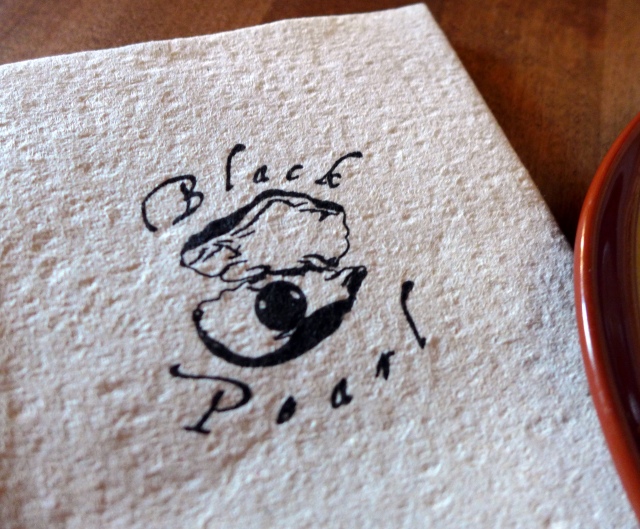 Black Pearl Seafood Bar is owned by the good folks who own Cafe Amore (another place I have not tried yet – soon!) and it’s seafood based tapas restaurant where everything is really made for sharing. The decor is definitely nautical but not tacky nautical and there is seating on both the main floor and space for about 12 upstairs. We didn’t make reservations, but they were able to get us in upstairs as long as we were finished by 7:30pm, which was totally doable.

My dining companions all ordered drinks (I was our designated driver), but I want to go back and try a few things – there are some cocktails on their drinks menu that I am pretty sure I would love. All three cocktails looked fantastic and everyone liked them – I like the style of each one, especially the crab leg in the Black Pearl Caesar!

The Black Pearl Menu has a good portion dedicated to oysters but I am definitely not a fan of oysters. I find them really slimy and if they are a “fat” oyster, I am even more grossed out. There was a childhood incident with oysters and I am forever tainted by it… I have tried to have oysters since then but I just can’t! However, my friends can, so a half dozen Raspberry oysters from the East Coast were ordered. They seemed to enjoy the oysters and at $18 for 6, it seems like an ok price for Alberta – it would probably be too expensive if you lived closer to the coast? I am actually not sure since I always bypass the oysters. 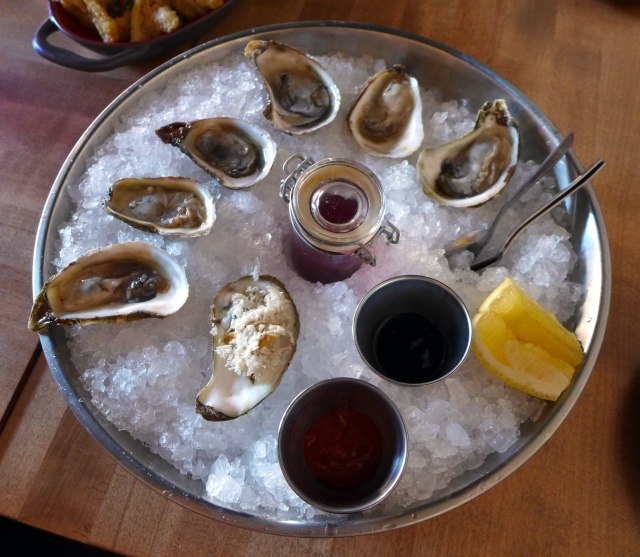 Since we were only having a light dinner, the four of us shared two dishes and everyone was really great about accommodating my shrimp allergy. We started with the wok style squid and I really liked this. It had a delightful amount of heat from the chilies, although it can sneak up on you a little bit. I found that batter was quite light so you’re not eating a doughy batter before getting to the squid. It was perfectly fried and the squid wasn’t overly chewy – I would eat this any time.

Our second dish was the seafood mac and cheese and we confirmed with our server that the seafood was not shrimp as it changes every day, but as luck would have it, it was lobster mac and cheese on the day we were there. I have had lobster mac and cheese before and haven’t loved it, so I was a little skeptical about the Black Pearl’s version. I love mac and cheese and I have tried many different ones but as of this moment – the Black Pearl seafood mac and cheese is probably one of the best I have ever had. It was cheesy but not overpoweringly cheesy – I think there is some tomato-based sauce mixed in as well and it is amazingly complementary with the lobster and the cheese. There were nice size pieces of lobster in the pasta as well and you could clearly tell it apart from everything else in there, so I was really happy about that. The portion is also quite large and I was so full but couldn’t resist eating the last bite – we couldn’t possibly let it go to waste!

Our experience at the Black Pearl was fantastic and our server Seth was absolutely lovely and very friendly! I love that they give you salt water taffy with your bill… It’s a fun (and delicious) way to end the meal. 🙂 The Black Pearl is going to be much higher on my list of places to visit, now that I know what I can look forward to. Even if I don’t go for a full meal – seafood can get pricey – I think that I might swing by for cocktails and a shared dish with a friend or two.

Our total bill came out to $105.53 + tip, which sounds quite expensive, but $37.50 was for cocktails, so $63 was for food, which means an average of $21 per dish. I don’t find $21 per dish extravagant, but if we were really hungry, I can see this adding up, although I was comfortably full sharing the two dishes between 4 of us. I think it would just depend on which items you get, considering pasta is much more filling than just seafood. Since I didn’t drink or eat oysters, my portion of the bill was $12, so I would say having 3-4 people sharing dishes is the way to go and really that’s the purpose of having tapas right?

The breakdown of our bill is as follows: