Remember when you were a kid and the best birthday parties you were invited to involved pizza and pop? Those were my favorite kind of parties and this past week my Gastropost Edmonton friend Brittney invited me and a bunch of pizza loving bloggers out to Urbano Pizza Co. for a pizza and pop party! 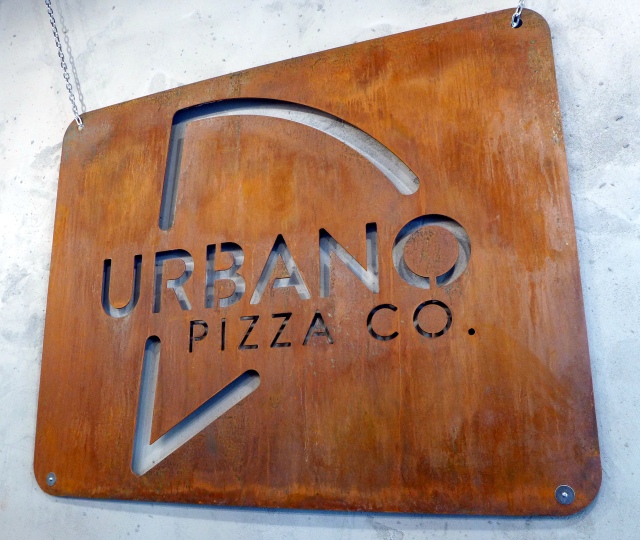 Urbano Pizza Co. is the newest restaurant from the owners of Sabor Restaurant and Bodega Tapas and Wine Bar and it’s a place where you can either build your own pizza or try one of their signature pies. The pizzas are cooked super quickly (90-120 seconds) and you could theoretically be in and out with your pizza in 5 minutes! The pizzas are cooked in these very cute and colourful personal ovens – I do believe I even heard that one of them only does gluten-free pizzas, so that’s really great for people with gluten allergies!

While you can do grab and go or even take your pizza home to bake, there is some outdoor seating along the Boardwalk and in the upstairs loft-like area of Urbano, which is where we were hanging out. Instead of letting us order pizzas – you know you will end up with doubles or even triples if that happens, Urbano decided to make our group one of each of the signature pizzas and then some combinations that the staff has come up with. I really like this because there were some combinations that I would not have considered myself so it’s nice to see the potential out there. Of course the downside of letting someone else create the pizzas is I have no idea what is in some of them! The fast cooking time for the pizzas is impressive as ours were coming out fast and furious – every time I thought I would sit down and start eating, a new pizza and photo opportunity would come. In the end, I *think* I got photos of all the pizzas we tried, but I am not sure… nevertheless, I know we had at least thirteen pizzas on our table! And before you think I am a glutton for pizza, I didn’t manage to try a lot of these that night. However, this was my second time at Urbano (I went as Linda’s lunch date to Urbano’s media preview just prior to their opening), so I have had some of these before.

Let’s start with the signature pizzas – there are six signature pizzas that you can order and out of the six, the Nonna’s Fave, which is a cheese pizza, has consistently been a favorite for me. I don’t know why but I find cheese pizzas to be really satisfying and I really like that Urbano lets you choose the sauce and cheese combination. The Nonna’s Fave is the cheapest of the signature pizzas at $9.95 and I think it’s fairly reasonable for what you’re getting. Despite being a thin crust pizza, I found the Urbano crust seemed to hold up quite well under the cheese as my slices didn’t have a soggy middle.

Nonna’s Fave: Any sauce, any cheese

The other signature pizzas are $11.95 and have some interesting combinations. As a non-egg lover, I know that the Bacon and Eggs pizza is not for me, but I managed to get a slice without any egg on it and I thought it was fine. I think that if I did like eggs, I might want the yolk a little runnier than what we received… 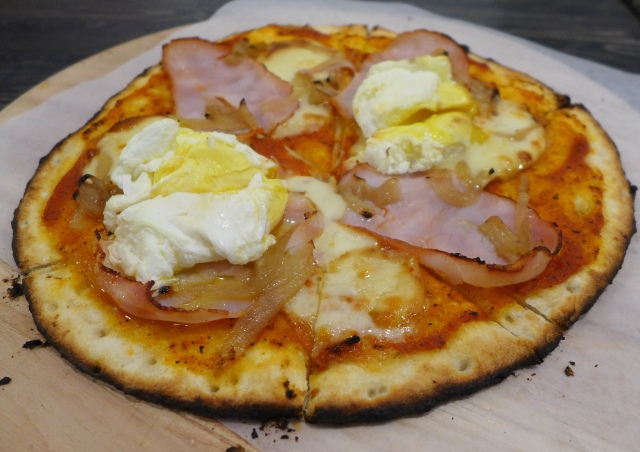 Following the Bacon and Eggs pizza is the Garden Fire, which is vegetarian and as someone who likes vegetarian pizzas, I thought it was quite good. There are a lot of grilled vegetables on it and it’s visually appealing with all the colour on it! I also didn’t realize the cheese was vegan until I added it to my photo description, so that’s a win for vegan cheese. :p

For those of you that like a Hawaiian pizza, the Pork and Pineapple is probably what you’re looking for, although the pineapple is grilled, which I think adds a little something something. I like camembert cheese quite a bit so I enjoyed it on this pizza as well, although that does mean that you’re not getting cheese in every single bite depending how it melts (I am totally ok with that). 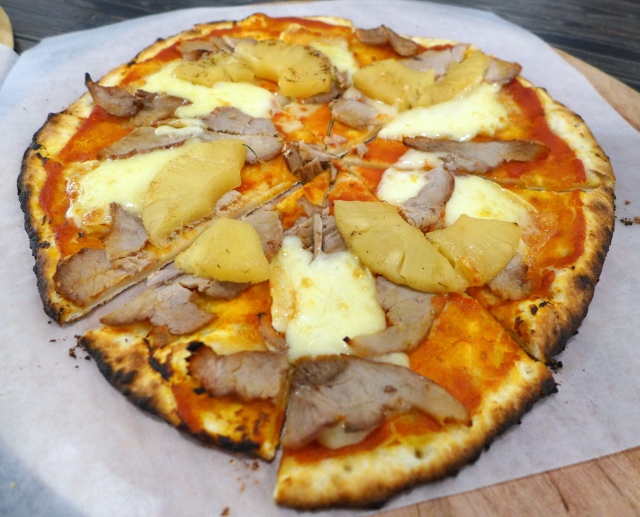 The piri squared was originally on the top of my list of pizzas to try since I quite like piri piri anything but I found that I didn’t love this pizza as much as I thought I would. I think there was just maybe too much going on for my tastes and all the flavours didn’t come through for me. Also this was one of the last slices I tried, so my mouth could have just been over-pizza-ed (is pizza fatigue a thing?). 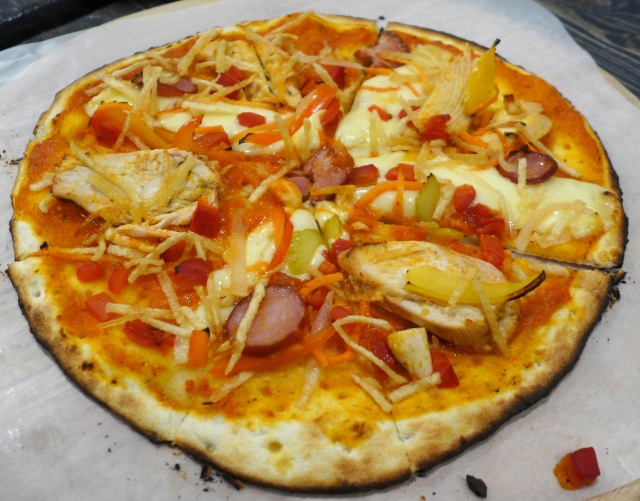 And finally, the last signature pizza is Bubby’s Fave, which is a sadly not Argenplath’s Fave. I really like smoked salmon and this shares all the components of a lox bagel, which I also love, but it turns out I don’t like cooked smoked salmon. I don’t like hollandaise either, but that’s probably not a surprise considering my aversion to eggs. A few of my dining companions really liked this one though, so if you like the components of this, it could turn out to be a winner for you too.

Before I send you off to check out a gallery of pizza photos – I want to say that one of my favorite pizzas of the night was actually a staff creation. This pesto, proscuitto and sundried tomato (I think?) pizza was fantastic – I loved how well everything went together – this was the only pizza I had two slices of and I didn’t regret it at all.

Are you overwhelmed by all the pizza options yet? I know I was! Here are all the other pizzas we tried… I can’t tell you if I had any of these but I can say that there were zero leftovers when we finished.

I think that Urbano Pizza Co’s prices are quite reasonable with the signature pizzas ranging from $9.95 – $11.95 and the create your own starting at $11.95 – most of the options are covered in that price, but there are premium items like Sabor’s famous piri piri prawns or smoked salmon for an additional $2/premium item. I liked the pizzas I tried, but I am a huge fan of thin crust pizzas, so if you don’t like thin crusts, I am not sure if you’ll like the pizzas as much. I did notice that some of the pizzas had a little bit of a doughy middle, so those probably could have benefited from a few extra seconds in the oven, but I think that might be something that will change as the staff gets to really know their ovens and which types of pizzas and topping combos need that tiny bit more time.

Disclosure: I was invited to the pizza and pop party via Brittney and our food and drinks were complimentary. However, I was not expected to write a review in exchange for our meal and all opinions remain my own.

One thought on “Pizza Party at Urbano Pizza Co.”

#GotItFree Getting picnic ready with @chapmansicecream! So excited that Chapman's has no sugar added + lactose free ice cream bars - these vanilla bars with chocolatey coating are a great and delicious option as I can't handle much of either (my spirit is absolutely willing but my body is much less on-board). 😅