Ramen… I remember the very first time I had ramen that was not instant “ramen” – it was at Kintaro Ramen in Vancouver and it was pretty much a life changing experience. Every since then, I have been on the hunt for the rich, umami taste that I experienced back in Vancouver. I have had ramen-ish experiences in Edmonton but nothing that was reminiscent of that very first bowl. But I think Prairie Noodle Shop is out to change the ramen landscape in Edmonton and I, for one am 100% on board for the Edmonton Ramen revolution.

Prairie Noodle Shop has been hosting a series of pop-ups over the past year to help them develop and refine their core recipes and I have had the privilege to make it to all four pop-ups. The frenzy surrounding the pop-ups have involved all seats (100-150 bowls) being sold out in 5 minutes or less! The good news is that Prairie Noodle Shop is going to be moving to a permanent bricks and mortar location on 124 Street some time this year – the timing is dependent on when the City approves their development permits etc.

The very first bowl I had from Prairie Noodle Shop was in October of last year where they sold the bowls as a first come first serve – the line for the 8pm seating started early and was sold out by 7:45pm. Edmonton was definitely chomping on the bit to get their first taste of Prairie Noodle ramen. The initial bowl was an Alberta pork based ramen using Irvings Farm Berkshire Pork – I vaguely remember hearing something about smoking the bones outside, so they did use every part of the pig that they could. The Alberta pork ramen had a shio style broth that was made with the smoked bones, dashi and dried shrimp. The toppings with this included pork done not one, not two but three ways: char-siu style, shredded ham and shoulders, and a crispy chicharon, sweet corn and an umeboshi (Japanese salted plum) egg. For someone who doesn’t love eggs, this umeboshi egg is *almost* enough to change my mind… I just end up giving the egg yolk to one of my friends and eating the rest myself. Finally, I want to talk about one of the most important things in a good ramen, the noodles – the Prairie Noodle Shop partners did try making their own noodles, but in the end decided it was a better option to have them made fresh by a Chinese lady (who remains a secret) instead. The noodles are very good and have that delightful “bite”/chew that you want in your ramen noodles.

Round two was on a cold November day where a hot bowl of noodles really hit the spot! This bowl was inspired by the “beer can chicken” and I think remains my favorite bowl to date. The chicken was sourced from D’Arcy’s Meats (they are in St. Albert) and the broth was a classic shoyu combination. Again the chicken was done three ways (just like the first bowl with the pork) with a deep fried chicken wing, grilled chicken thighs and a piece of crispy chicken skin. The other toppings included some pickled pearl onions, lightly toasted kale and the famous umeboshi egg!

Pop-up number three went down in March and I almost decided not to grab tickets because it was billed as a vegetarian ramen. I was quite skeptical that they would be able to get the necessary umami flavour out of vegetables but my friends convinced me that they were sure Prairie Noodle could pull it off, so I got myself a ticket (really not as easily as I am making this seem – I am pretty sure someone else had to share one of their extra tickets). This vegetarian ramen was no joke… it was insanely filling and I didn’t miss the meat at all. How can that be? Well the Chinese vegetable style broth was bulked up with red miso and then the ramen itself was topped with a mound of Sylvan Star Gouda and more garlic paste than any vampire would ever want. The cheese just melted into the broth and it became this cheesy noodley broth that I could not finish, but it was so good! 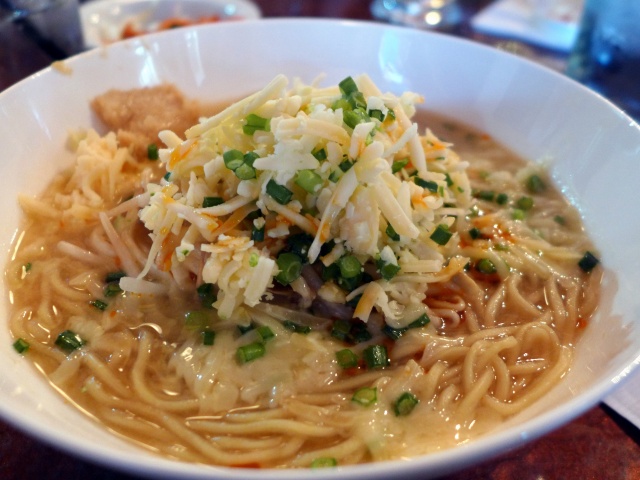 Prairie Noodle wrapped up their pop-up series with a homage to the meat and potato style meal that is so very Albertan. This one took place tonight and despite the addition of 50 extra bowls (up from 100), the tickets sold out so fast so furious that I missed getting one myself but luckily my ramen loving pal Cindy (otherwise known as let’s om nom) hooked me up with a seat. This was a completely different style of ramen known as tsukemen, which means instead of having a soup base, you take your noodles and dip it into a thicker style broth. The beef (again sourced from D’Arcy’s Meats) was ground up “dandan” noodle style and topped with some chili peppers and an umeboshi egg. The dipping broth was a tangy potato broth and was definitely thick enough to stick to the noodles. 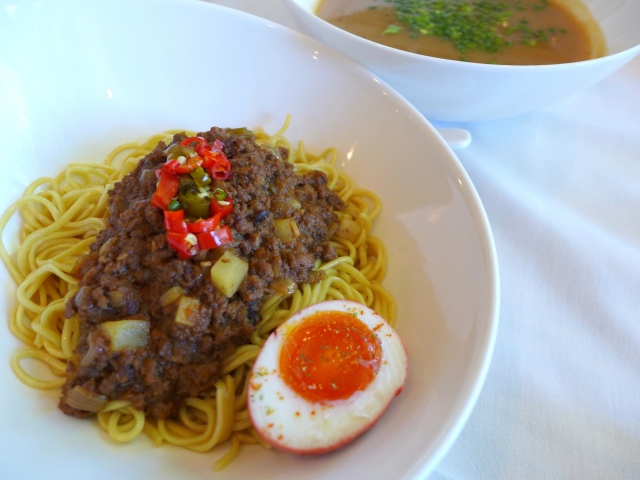 One of the highlights tonight was the fact that Prairie Noodle Shop had a poster out front that showed off the concept for their new space. I think the hope is to have it open late this year and I know that I will hanging out and having ramen there all the time. Also super cool was that Cindy’s photos from the previous ramen nights were blown up poster size and placed right outside the space – she takes gorgeous food photos. 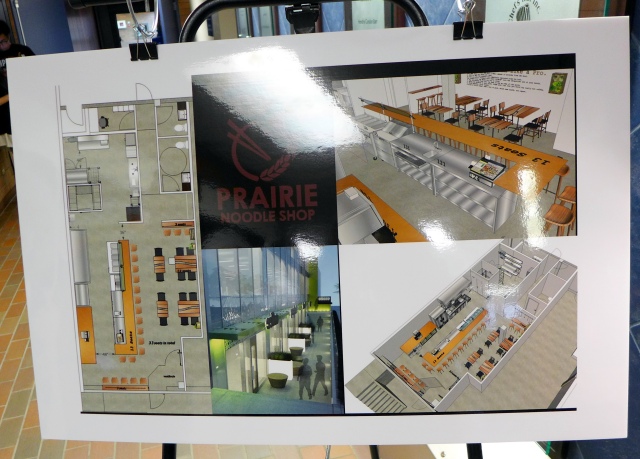 All four bowls of ramen were $15 + tax and tip, which I think is fairly reasonable especially considering that Prairie Noodle Shop sources a lot of their products locally. I am very excited for their new space to open up and hopefully the price point will remain around that $15 mark!

I can’t wait until Prairie Noodle Shop ramen is available on a daily basis – I think the demand for their pop-ups has shown that Edmonton is clamoring for noodles and I truly hope that this will start a ramen revolution with even more delicious ramen shops in the city. Congratulations to everyone on the Prairie Noodle Shop team on the success of these pop-ups and all the best as the permanent location gets developed!

It's been a long week and it's only Thursday... Thank goodness I was able to get take out from one of my favorite places ever @uccellinoyeg! My only regret is not ordering a bottle of lambrusco too. 😅