It’s been awhile since The Common has hosted a pop-up dinner… I think the last one was way back in 2013, so I was pretty excited to see a tweet a few weeks ago saying a pop-up dinner was going down on May 26. Of course as soon as I saw the date, I cringed because it’s the end of the month and I am over my monthly budget. I was going to have to pass on the pop-up but I got really lucky because Andrea had a contest giving away tickets to the event… I didn’t win at first but the original winner wasn’t able to make it to the event so I was able to get myself a spot at her table! The theme of this pop-up with “Honey and Hot Sauce”, which I thought was great – there is nothing like a good sweet and spicy pairing, although hopefully not too spicy since I am a wimp when it comes to spicy things.

The first course was Wings ‘n Things, which included dill pickle chicken wings, sweetbreads with sriracha walnuts and a rabbit wing with hot chilies and cherries. The chicken wings were definitely dill flavoured and I didn’t notice the heat until the end when it just sneaks up with a bit of a punch. I wasn’t expecting it at all so that first chicken wing definitely caught me off-guard. The sweetbreads were very crispy and quite good, which is weird for me because sweetbreads typically don’t rank high on my list of things to eat. The rabbit was interesting and well cooked, although maybe a touch too dry, but that’s a minor quibble. I struggled a little bit with the hot chilies under the rabbit as it was a little too much for me. Of the three items on the place, I actually liked the sweetbreads best and I think that says a lot considering how I feel about them in general.

The second dish of the night was a honey glazed bacon with a hot and sour cabbage – spoiler alert – this was my favorite dish. I really liked the honey glazed bacon wrapped with a little bit of puff pastry – it was crispy and not overly fatty. I was a little sad that my portion was smaller than some of the others at our table! I am not a cabbage fan, but this salad was perfect as it helped cut through the fat in the bacon. The red sauce tasted like gochujang paste to me and when I mixed it with the cabbage and the bean sprouts. there were definitely a Korean-lite essence to the dish.

Our third course was a chipotle rubbed lamb with tarragon, honey and floral vegetables. Full disclosure here, I am not a lamb fan – I don’t particularly care for the taste of lamb but I did try some of the lamb here. I didn’t really get too much heat on the lamb and it was pretty good (for lamb) but it wasn’t something I wanted a lot of. Please take that as a preference thing on my part and not a mark against the dish. I don’t really understand why the description used “floral’ vegetables, but the vegetables (carrots, corn, leeks etc.) mixed with a little bit of honey was fantastic. 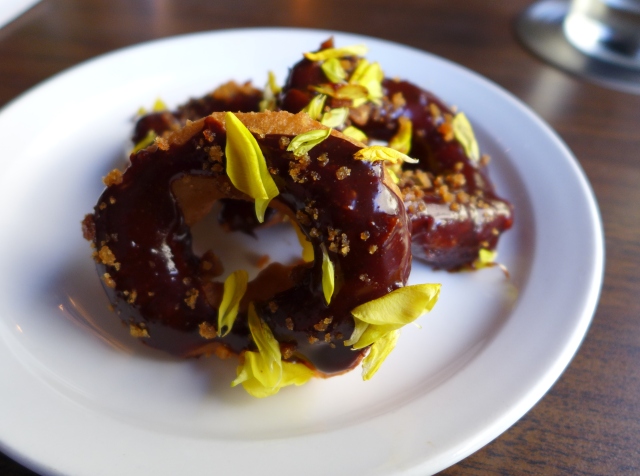 Dessert was chili chocolate doughnuts with caragana… I probably spoke too soon when I declared the honey glazed bacon as my favorite dish because this was also my favorite, so let’s just say that I had two favorites of the night. The doughnuts were a great way to end the meal and they were chocolate-y with a nice contrast in textures with the crunchy (sugar?) bits and the doughnut itself. The edible caragana flowers made for a beautiful looking dessert – someone even mentioned that all everyone posted on instagram was the pictures of this dessert!

I had a great time at the Honey and Hot Sauce Pop-Up and in addition to a delicious meal, the company was even better as I got to hang out and eat with Andrea and Teresa. I can’t imagine having a pop-up dinner at The Common without my two partners in crime – it would feel like we’re breaking tradition if we didn’t go to a pop-up dinner together since I am pretty sure we did all the previous ones as a trio! I am happy to see pop-up dinners coming back to The Common and I am looking forward to the next one (but hopefully not at the end of the month again – I am always “broke” at the time!).

Since I won my ticket to the Honey and Hot Sauce Pop-Up, I didn’t pay for anything other than a tip, but the price for the 4 course meal was $40/person + tax and tip. I don’t think $40 is an unreasonable amount to pay for the meal, although I guess it would depend if you got big portions or smaller ones. There was a little bit of inconsistency in the size of the two middle dishes as some portions looked much larger than others. I suppose that if I had gotten mainly smaller ones, the $40 would seem a little expensive but compared to a $40 a la carte meal, this is most likely around the average price for 4 courses of this size. Of course you are probably paying a small premium to have an off-menu dinner but sometimes you have to pay to be in the exclusive club of people who were able to have this particular meal.

Have been using these @adewunmi.yeg products and love them both so much, especially the face cream! The customized hydrating mango face cream is my new go to - it has been a lifesaver as I broke/damaged my skin barrier (whoops) with some other products and it has helped restore my skin to where I want it to be.