Back in July I was invited by the new Edmonton Dishcrawl ambassador, Gemma Huber (@DishcrawlYEG), to come check out the dishcrawl that was happening in the Southgate area. A dishcrawl is an organized food crawl (as opposed to a pub crawl) of 4 restaurants in one night – restaurants are normally kept a secret until the evening of the event, with the exception of stop 1, which is revealed to crawlers 48 hours prior to the event.

Despite being a lifelong south-sider, I have to admit, I rarely eat in my own neighbourhood, partly because I feel it has way too many chain restaurants and I prefer to eat local. Gemma arranged for us to hit up four local businesses and it definitely served as a reminder that there are several hidden gems in the south side area, so maybe it’s time I start thinking of dining in my own neck of the woods.

Our first stop of the evening was at The Bothy, which is a lovely place just off Calgary Trail. I have been by before and I adore their chicken and leek pie and because I like that one dish so much, it’s the only thing I’ve tried at The Bothy. Luckily, the dishcrawl offering gave me a taste of some of the other options. 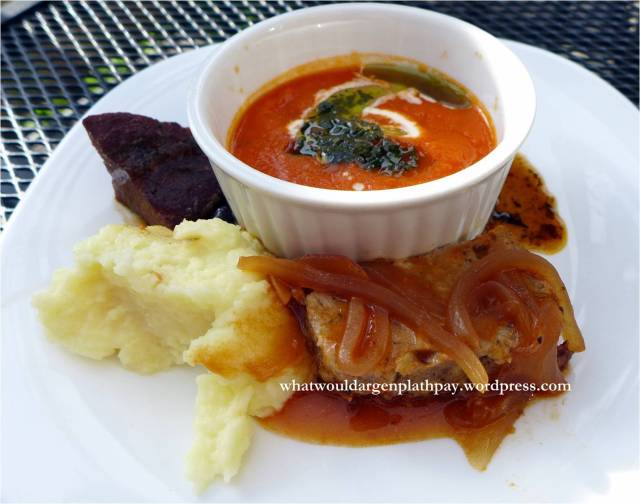 This plate was comfort food at its finest for me – I would want to eat any (or all) of these items on a Fall or Winter day. We had the Lorne Meatloaf made with Irvings Farm Cumberland Sausage, Sous Vide Beef Cheeks (from Sangudo Meats and cooked at 80 degrees for 24 hours), Tomato and Bacon Soup and Mashed Potatoes. I love that The Bothy sources locally and I was thrilled to hear that the protein items were all from local producers. I don’t really eat meatloaf (it’s not something that I grew up having), so this was almost like culinary expansion for me and the Lorne meatloaf was fantastic! I liked the flavour from the sausage and the onion gravy on top was a little sweet but gave the meatloaf a lovely depth of flavour. I am always intrigued by sous vide cooking and I liked the beef cheeks, although I would have liked it a tiny bit more tender. Tomato soup is my ultimate comfort food and I would have The Bothy’s version any time. I liked the bacon in it as it gave it a hint of smokiness and the texture of the soup just makes me think of sitting at home on rainy/chilly days and drinking soup out of a cup. Normally I don’t have feelings about mashed potatoes but I thought these were excellent – they were so fluffy and delicious. The Bothy was a great first stop for the dishcrawl and I would definitely suggest stopping by for food, but also for the extensive whisky selection they have available.

After our time at The Bothy, we headed north for a few blocks to Syphay, which is another restaurant I really like, but don’t visit very often. Syphay is a family owned Thai/Laos restaurant off Calgary Trail on 60th Avenue. It’s a relatively small restaurant as our dishcrawl group of 39 seemed to take over the entire place! If you’re not a south-sider, Syphay has recently opened up a downtown location on 94 Street and Jasper Avenue.

The Syphay dish included the Phanang Curry with Chicken, Pad Thai and a Crispy Garlic Shrimp. I loved the Phanang Curry, which typically consists of Thai Phanang curry, coconut milk, green and red peppers, broccoli, snow peas, basil leaves, kaffir lime leaves and your choice of chicken, beef or tofu. The curry had the perfect amount of heat as it was a bit spicy but not so spicy that you felt like downing a huge glass of water. I love Thai curries because I find that the coconut milk adds a little bit of sweetness and tones down the fire of the curry. The Pad Thai was a little spicier but it was one of the better versions I’ve had. Syphay’s Pad Thai includes stir fried rice noodles in a chili sauce, egg, bean sprouts, carrots and chives topped with peanuts and cilantro. I would go back and have this any time! Unfortunately, I had to pass on the shrimp due to my shrimp allergy, but my dining partner in crime Andrea happily ate it for me (see her review of the Southgate dishcrawl here). Our stop at Syphay was great – I need to stop by more often!

As we were heading to our third stop – Battista’s Calzone Mobile, the skies decided to open up and pour rain, which was not awesome for standing outside sampling from a food truck. Thank goodness Andrea had an umbrella because I was obviously unprepared. I will admit that I found the addition of the Calzone Mobile a bit strange for the southgate dishcrawl, because neither Battista’s Calzone Company or the Calzone Mobile is in/regularly frequent the area. The rain certainly made this stop my least favorite and while we were allowed to sample two of the four offered calzones, I only managed to get one before dashing for the car.

The sample I had was the Pesto Presto calzone, which is made up of a blend of basil pesto, chicken breast, homemade tomato sauce and mozzarella cheese. I have tried this before at the bricks and mortar version of Battista’s Calzone Company and thoroughly enjoyed it but I didn’t love the mobile version nearly as much. I don’t know if the rain and accompanying rush to feed people affected the food truck version, but I found it a bit doughy and a little bland. I am going to chalk this one up as an unfortunate side effect of dishcrawling in the rain and head back to the 118 Avenue storefront for my calzone fix instead.

Dessert was the highlight of the dishcrawl for me, possibly because it had one of my favorite desserts – Pannacotta. We were given a trio of desserts, a homemade Pannacotta with wild berry sauce, Caramel and Chocolate mousse with pistachio crème anglaise and vanilla ice–cream and Cantuccini Biscuits with sweet Vin Santo wine. This dish had me at “hello” and once I sampled it, I died – it was perfect for my tastes. The Pannacotta was not overly jiggly and had this beautifully smooth texture that went down easily. I was initially surprised by the firmness of the mousse, because when you say mousse, I expect a very airy texture but this was relatively firm and required a little pressure with the spoon. The flavour was so good – I typically shy away from caramel because I think it’s too sweet but this was not super sweet and the ice cream and pistachio crème anglaise definitely helped cut the sweetness. Finally was the Cantuccini biscuits and Vin Santo wine, which was my least favorite of the trio, mainly because the wine was much too sweet for my tastes. One of my table mates loved it though and drank the wine all by itself! I stuck to the biscuits and dipped it into my latte like biscotti, which was just right for me. I can’t wait to come back to Massimo’s Cucina Italiana for a full meal, but I think I might jump straight to dessert first.

Full disclosure here – I had my ticket comped by Gemma, but as always, my opinions remain my own. The cost of this dishcrawl was $50 + a transaction fee so it came out to approximately $54 per person. I don’t know that I would feel 100% comfortable paying $54 for this dishcrawl – $40-$45 is a bit closer to what I would want to pay. I liked most of the dishes at this dishcrawl but the portions are a bit smaller compared to the previous dishcrawl I was on. To be honest, I would actually be more ok with a $50 price tag if the third stop wasn’t a food truck.

Overall, I had a good time with Andrea (as always), but I found it a little difficult to chat with my fellow dishcrawlers as we didn’t travel to each stop as a cohesive group but as several small groups, which made it harder to meet everyone. We did end up sharing a table at the last stop with some other dishcrawlers and I was sad that it took so long to meet them as they were awesome to talk to. I also wished that the stops weren’t tweeted out from the previous evening (there were back to back southgate dishcrawls and we were on day 2) as that took away some of the mystery from the dishcrawl. These are small quibbles though and didn’t really diminish the dishcrawl experience.

I would suggest considering a dishcrawl if there is an area you want to explore but without a huge commitment – 4 restaurants in one night is much easier to handle than a series of dinners over many nights. Gemma is actually running an interesting event called Neighbourfood on August 25, 2013, which covers 8 different restaurants in the 124 street area. Neighbourfood is different from a dishcrawl in that you buy a $15 ($20 at the door) general admission ticket, which covers the food at one stop and then purchase additional tickets ($5) for the number of restaurants you want to try. So if you want to try all 8 restaurants, it’s going to cost you $50 total (same price as a regular dishcrawl). A great thing about Neighbourfood is that a portion of the proceeds is going to support YESS – Youth Empowerment & Support Services in Edmonton! If you do decide to go dishcrawling (or neighborfooding)- let me know how your experience goes. 🙂