For those of you that follow lots of Edmonton food people on twitter, you may have noticed a torrent of @Smashburger tweets last night as a number of us were invited to the media launch of the newest Canadian Smashburger (1st in the Capital Region, 3rd in Canada) in Sherwood Park. As I was able to bring a few friends with me, I dragged A and JP along despite the potential of burger fatigue from the Canada Day long weekend because I needed to try several items. Randomly, it turns out the owners (Bo and Lin) of this Smashburger are casual friends of mine, so I was even more excited to try things out and talk about the food with them.

Smashburger is an American burger restaurant that started in Denver in 2007. The Smashburger concept is slightly different from the usual burger places as the burgers here start off as a fresh (not frozen) ball of 100% certified Angus beef and then smashed to order with a special “smashing tool”. Smashburger does this to sear the bottom of the burger so it can seal the flavors in the meat, so the burgers will retain the beefy flavour. This smashing process sounds really intriguing and I wish I had asked if I could (one day) get to see the smashing happen live (I wonder if Smashburger does kitchen tours?). 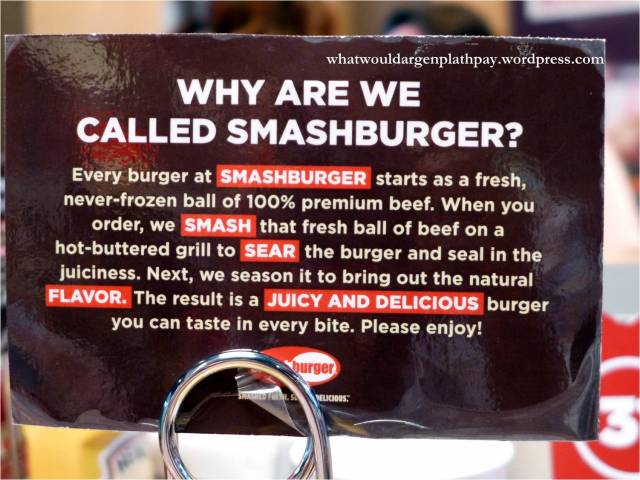 Anyways, on to the food! I had a moment of panic when we arrived and there was no line in front of us but people coming in behind, so we quickly just ordered the first three burgers we saw on the menu and three different sides. You can choose to either build your own burger or get one of the classic or signature recipe burgers. The burgers also come in three sizes (small, regular and big), although the small option is not really noticeable on the menu board.

First up was the Classic Smash – a burger with American cheese, Smash sauce, ketchup, lettuce, tomato, pickles and onion on an egg bun. I think the Classic Smash is a good barometer for comparing Smashburger to other burger places because this is pretty much a regular burger. I really enjoyed it and I found the beef to be quite juicy and it would fulfill any cravings I would have for a burger. The burgers all come open and ready for the customer to put together (for lack of a better phrase), so I’ve included those shots for y’all so you can see all the individual components of each one (before/after shots).

Next up was the Bacon Cheeseburger because we’re suckers for bacon and if I was going to go for more than the basic burger, the first thing I tend to add is cheese and bacon. The Bacon Cheeseburger comes with apple-wood smoked bacon, American cheese, yellow mustard, ketchup, pickles and onion on an egg bun. Again, the beef patty was quite good but this one was a bit messier than the Classic Smash. There was too much mustard on this burger for my tastes but A and JP thought it was ok. Mustard notwithstanding, I enjoyed this burger quite a bit and loved the egg bun in this and the Classic Smash. 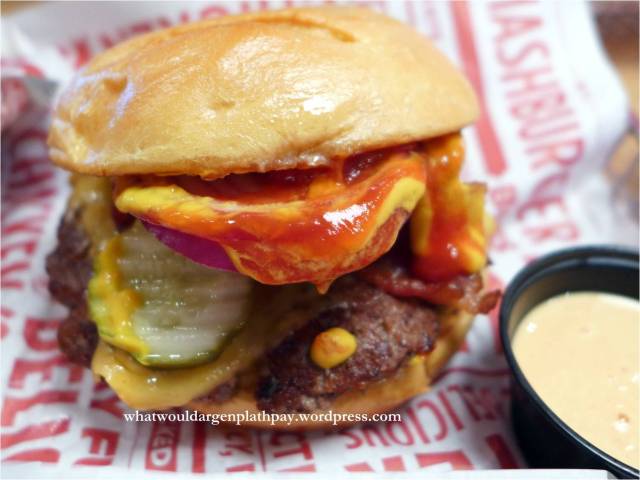 Our final protein option was the Avocado Club Chicken and it was probably the favorite of our table. The Avocado Club Chicken came with fresh avocado, apple-wood smoked bacon, lettuce, tomato, ranch dressing and mayo on a multi-grain bun. The fresh avocado was great and I liked that the chicken wasn’t completely drenched in sauce, especially since I am not a huge ranch and mayo fan. 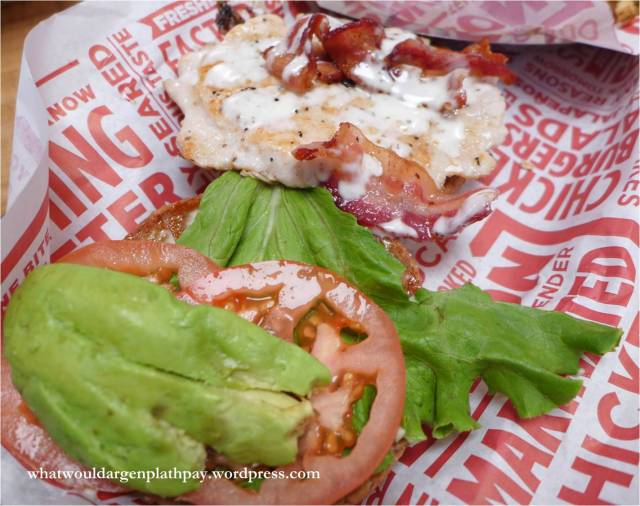 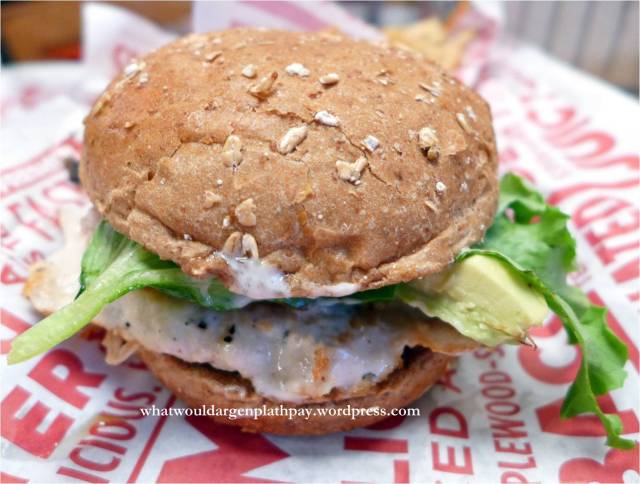 In addition to the three burgers, we also tried three different sides. Of course, the Smashfries were a must and they are shoestring fries tossed with rosemary, olive oil and garlic. I love shoestring fries, so that was already a win for me, but I don’t love rosemary so I found that part a little overwhelming. JP loves rosemary and thought the fries were awesome so I think how much you like the Smashfries is dependent on your personal feelings on rosemary.

We also ordered the haystack onions and were slightly disappointed by how salty they were once we got closer to the bottom of the dish. I don’t know if it is because they just weren’t evenly coated or what, but the top layer was quite good and then we got deeper into the dish, it was just really salty. I do think that these would be quite tasty on a burger and what do you know – Smashburger has that as an option (you just need to order the BBQ, Bacon & Cheddar Smashburger)!

And our final side was also my favorite – the sweet potato fries were exactly what I want in a fry. The outside was nice and crispy while the inside was still a little soft. I did forget to dip them into the sauce provided so I can’t comment on that, but if I liked them enough on their own without a sauce, I think it’s worth the extra $0.50 to get these over fries.

We weren’t able to get full size milkshakes during the media launch, but I did get to sample the chocolate and saskatoon berry milkshakes. The milkshakes are all made with Haagen-Dazs ice cream and I liked both flavors a lot. The thick milkshake texture was great – I would have these any time, especially on a hot day like yesterday. 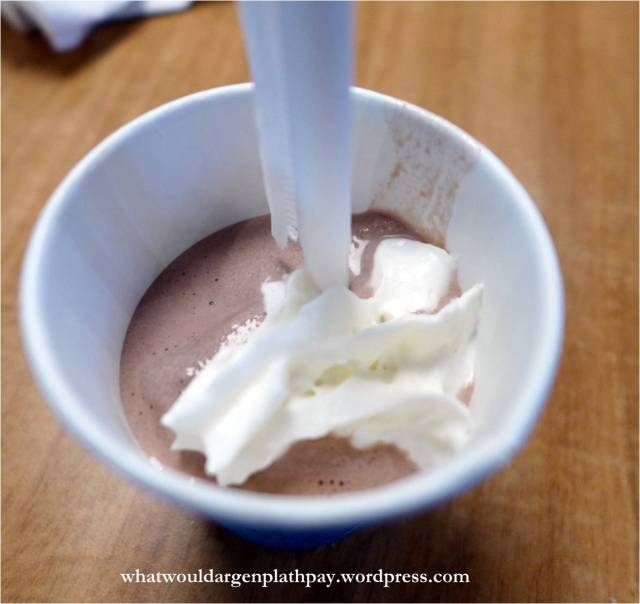 Overall, I had a great time at Smashburger and I did enjoy my meal despite a few quibbles, but a lot of that is personal taste and can easily be fixed by asking for less of the sauces or for them to be on the side. There are several other items we weren’t able to try (mainly because it was too hot to eat a lot) like the signature recipe burgers and salads. I really want to try the Edmonton Smashburger (I like that they have a slightly different menu for each area), which comes with Canadian seasoned grilled onions, cheddar cheese, Canadian BBQ sauce and a fried egg on a kaiser roll. My only concern is I don’t like eating runny egg yolks so maybe the Edmonton Smashburger isn’t for me? It looked delicious from all the other photos I saw though!

So if you’re planning on getting a smashburger, side and milkshake, be prepared to pay around $15-$18 depending on the size and type of burger/side you’re getting. The portion sizes are quite large so I don’t think you will be hungry afterwards (at least I wasn’t!).

While I am ok with the price/value of what I am getting at Smashburger, I don’t know if I would make the 30-45 minute drive out from my place to Sherwood Park. If I happened to be doing something in Sherwood Park or closer to that end of the city, I would probably stop by again, especially if I have milkshakes on the brain. If you’re in the Emerald Hills/Sherwood Park area – definitely stop by and give Smashburger a try, and if you’re far away like me, let’s all just hope Smashburger opens up somewhere closer to us (soon).

Now what about that giveaway I mentioned? I have $20 in Smashburger bucks to give away to a lucky reader.

All you have to do is leave me a comment on what you would want to try off the Edmonton menu. Please make sure you enter a valid email as that is how I will get in touch with you.

You can also get “bonus” entries by doing the following:

Congrats to Peggy Doyle on winning the $20 in Smashburger dollars!

Disclosure: While I was invited to the media launch of Smashburger and casual friends with the franchise owners, all opinions in this post remain my own.

Candied lichen... Who knew it would be something I would enjoy so much? I went on an @abontheplate dinner crawl with @lindork to check out their festival menu (runs Aug 6 - 15) and the sea buckthorn ice cream with birch syrup, saskatoon berries, candied lichen @thebutternuttree was a standout dessert for me!