Sorry friends, no mani Monday post for this week. I broke most of my nails in Vancouver over the long weekend so I’ll try again for next week. However, I couldn’t let this Monday pass without a video of the week and luckily enough, I do have one for y’all.

Right before the Easter long weekend, I was fortunate enough to get advance screening passes to see Revolution from filmmaker Rob Stewart, who made the wonderful documentary Sharkwater. I’ve developed an affinity for sharks in recent years (I don’t know why) but I thought Sharkwater was very well done and it has certainly highlighted the plight of sharks especially those being killed just for their fins – I definitely no longer consider shark fin soup a delicacy and can’t tell the difference between fake shark fin and the real deal anyway so why bother eating it, therefore I remain hopeful that more cities and countries consider banning the sale of shark fins. But I’m not here to discuss Sharkwater, although if you’ve never seen it – I would encourage you to borrow it from EPL or rent/buy a copy off iTunes etc. and take a peek.

I will admit, an awesome bonus to the advance screening was that Rob Stewart was there in person to do a Q and A session and he is so eloquent and passionate about this topic that for me, the Q and A was even better than the film (but I really enjoyed the film too). 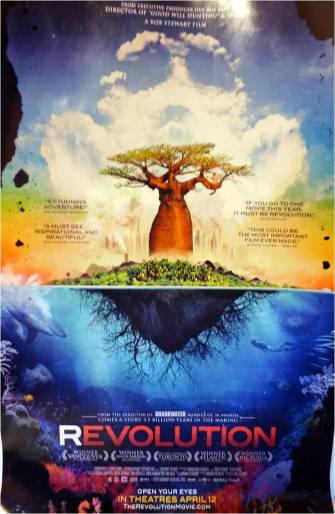 Revolution is a film with a broader context than Sharkwater. The focus moves beyond sharks and talks about the oceans, planet, environment and how we are affecting it. Essentially I feel like the film is saying that by saving the environment, we saving ourselves – that the environment and humans have a symbiotic relationship and by killing the environment, we’re just slowly killing ourselves. However, I wouldn’t classify the film as all doom and gloom – it’s more of a call for action – it also highlights the fact that species do evolve and adapt or as Dr. Ian Malcolm from Jurassic Park says “Life finds a way.” (I love Jurassic Park – and this thought clicked in while I was watching it in 3D this weekend).

As you can see from the trailer above, it’s a pretty visually stunning film and seeing the stark contrast of beautiful coral reefs and dead zones in the oceans, I was floored by the destruction and devastation that is taking place. A key message from that film was that people need to be taking action and doing more conservation and working to mitigate/reverse some of the environmental damage already being done. There is a great focus on education and appealing to the youth of today because they are the ones who will be most affected by what we are doing and inheriting this environmental legacy (although what that legacy looks like will depend on what we do now).

This film will be out in theatres this Friday (April 12) in Canada and they are working on distribution rights for other parts of the world as well. I would strongly encourage everyone to go see it because I think it’s definitely a film that gets you thinking about your own environmental practices and while it can be very hard to change our lifestyles, small scale changes are better than nothing. For myself, I am trying to be more aware of where my food comes from and am embracing and learning more about local food. I am also trying to be more cognizant of my carbon footprint (I do take a lot more transit than I used to) and consumption practices. Do you have any tips on things we can do that would minimize our environmental impact?

#gifted Thanks @justcookkitchens for sharing this Rise and Grind box with me! It has been so handy this past week during my staycation with several portable options for breakfast on the go (e.g. Made good snacks, Moo's protein muffin, 7 Summit Snacks chocolate, Bad Coffee nitro cold brew) and leisurely breakfast items (Oatbox granola, Rogue Wave coffee).