I originally wasn’t planning on attending Winefest as I had to work during the industry tasting and couldn’t afford the $75 ticket price in my Frugal February budget, but JP won tickets for the Saturday afternoon tasting and invited me along (yay JP!).

Winefest is an all inclusive event held at the Shaw Conference Centre that allows participants to sample hundreds of different wines from all the around the world. While I like wine, there was no way we would be able to sample everything and I have to admit, I was really harsh with which sips I finished and which ones I just dumped out. But there was so much wine that I probably missed some really good ones, but *shrug* that’s what next year is for?

One of the first wines that we started out testing was the House Jam Sweet Chillin’ White. If you like really sweet white wines, this one might be right up your alley – this one tasted just like juice and it went down really easily. I am thinking that I might use it to mix up wine cocktails since it’s so sweet. 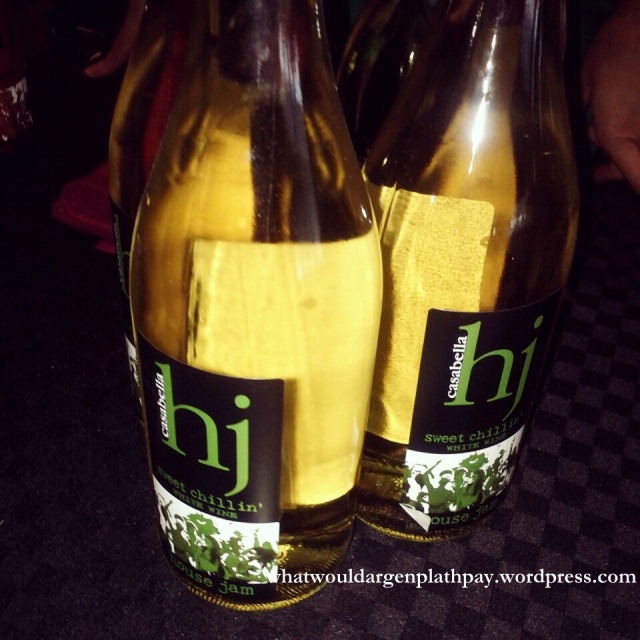 Another series of wines that I know I love are the Cupcake wines… I’ve tried several of these (mainly the white wines) but took the opportunity to sample a few of the ones I haven’t had before. The Petite Sirah was an incredibly smooth red that we all loved (especially JP, who wanted seconds of it) and the Angel Food was also quite lovely, although my favorite Cupcake wine is still the Riesling. So if you’re looking for a relatively inexpensive wine that seems to go over well, I would suggest giving Cupcake wines a shot. 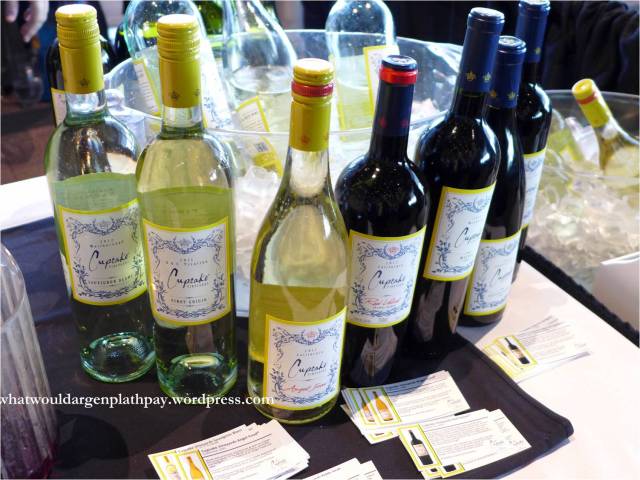 A Plethora of Cupcake Wines!

Other favorites for me included the Cline Cellars Cashmere and the Estampe Estate Rose. Both of these wines were lovely and are definitely on my list of wines to buy. JP tells me that the 2009 Cashmere was even better than what we tried but I suppose you can’t win them all. A highlight of both wines were how smooth they were and they really appealed to my palate as they went down easily without too much “bitterness” (this is the only way I can think of describing this right now) that some wines can get. Apologies for the vague description but I am not a huge wine expert – I just like to drink. 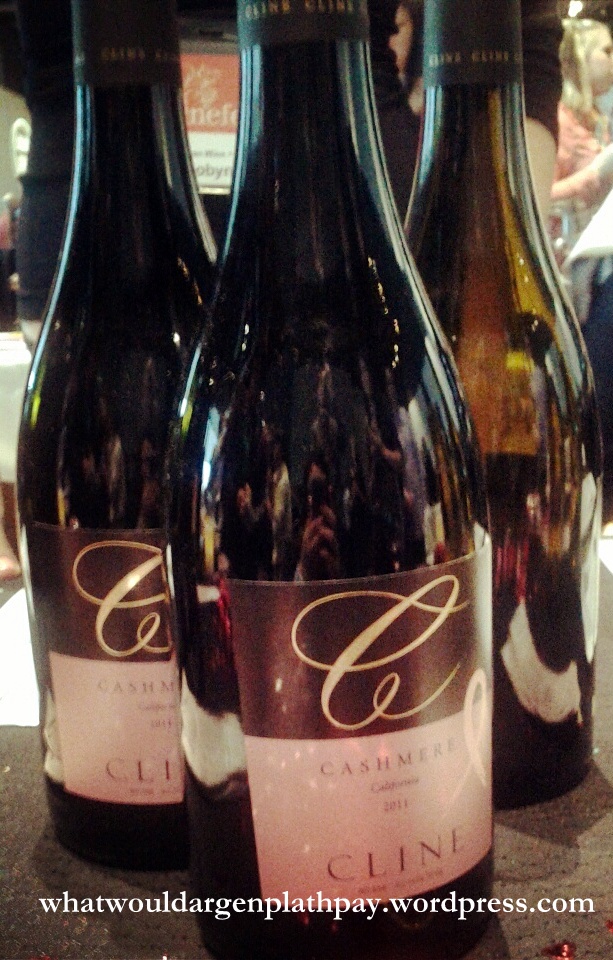 Moving onto something I am better at describing – Winefest had some ridiculously amazing food! The Cheesiry was there with samples of the pecorino and what else goes better with wine than cheese? There were samples of a young, old, and lavender and herbs de provence infused pecorinos. Our group had a variety of opinions so depending on your tastes, at least one of these was a hit. Personally I preferred the young pecorino over the others. 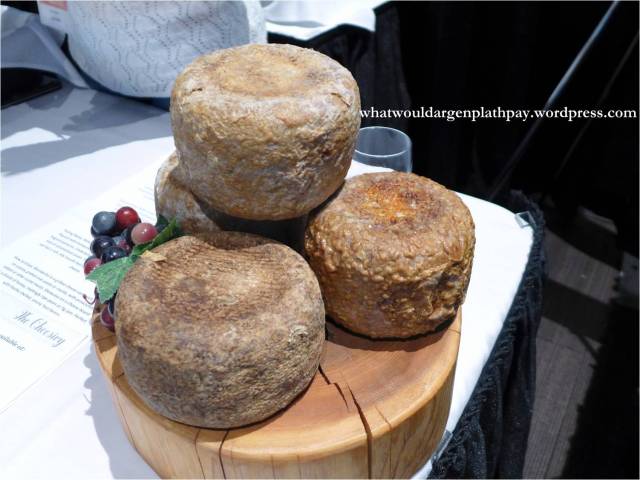 The Shaw Conference Centre also had a wonderful spread of appetizers and desserts available and even though I just had lunch at King Noodle House, I still indulged and sampled nearly everything (except the flatbreads). My absolute favorite were these “duck spoons” and I can’t tell you how many of them I had! They were flavorful and moist and came on these wonderful serving spoons! 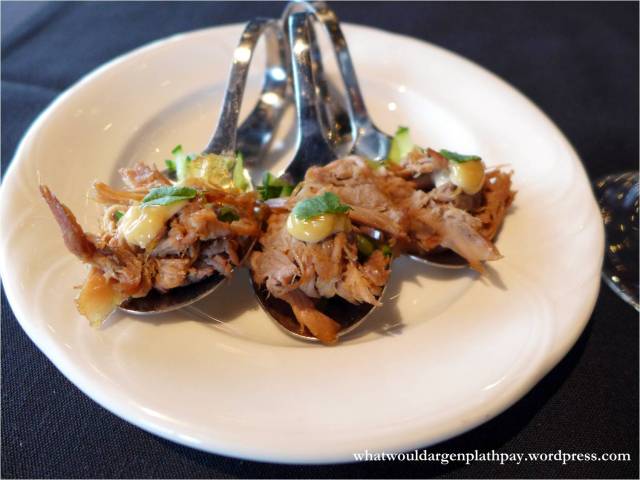 There were also some very delicious crab cakes and meat balls/beef skewers. The crab cakes were filled with so much crab and the crispy exterior gave way to a beautiful soft interior. As a seafood lover, these were just little bites of heaven! I also had a few (ahem *several*) meat balls – they were just so easy to grab and eat while sipping wine. Aside from the portability of these, they were very tasty as well – they had a little bit of springy-ness to it and spices that gave them good flavor. 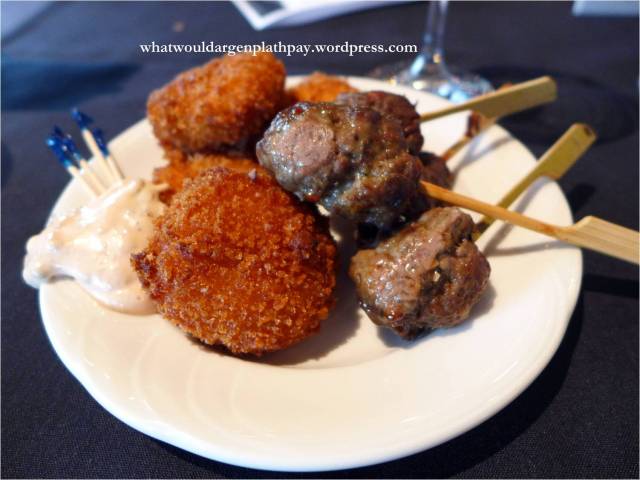 I regret not going back for more of these proscuitto wrapped breadsticks. At first glance, it doesn’t seem like anything special but the breadsticks were so flaky! The proscuitto added some saltiness to the breadsticks but for me, it was all about the bread. While I have a photo of the arancini, I actually did not sample it, but no one had overwhelming reactions either way to it, so my conclusion is that it was ok but there were many better options available. 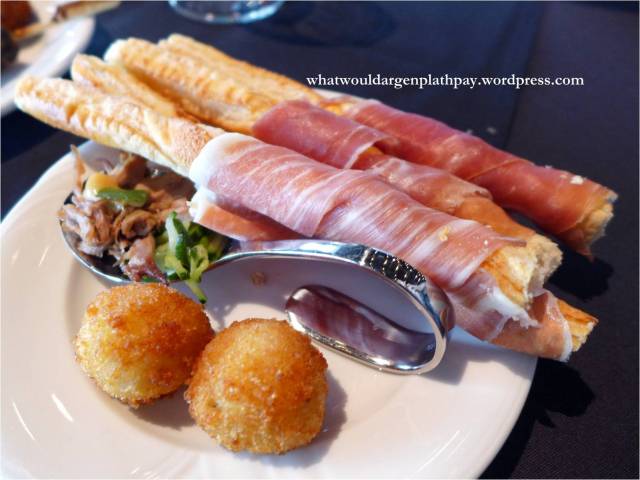 The appetizers were generally a big hit with us, but the dessert table had more of a mixed reaction. For instance, everyone liked the dense, chocolate-y brownies, but the strawberry cake was a bit a of a miss. We all found that colourful top layer of the strawberry cake weird – it had a flavor we couldn’t quite put our finger on and we didn’t enjoy it. It was also a bit too wet so it didn’t mesh as well with the cake on the bottom. 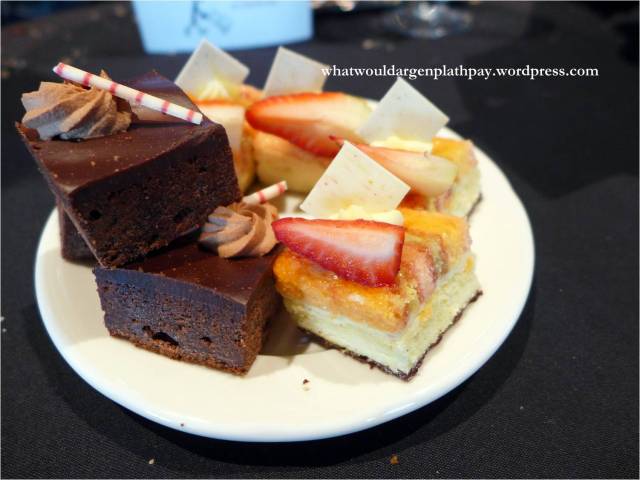 The eclairs and fruit tarts were much better received. I only sampled the eclair but it was great – the texture was nice and airy and the coffee cream in the middle was perfection. Everyone else really liked the fruit tarts and I think JP even had two! 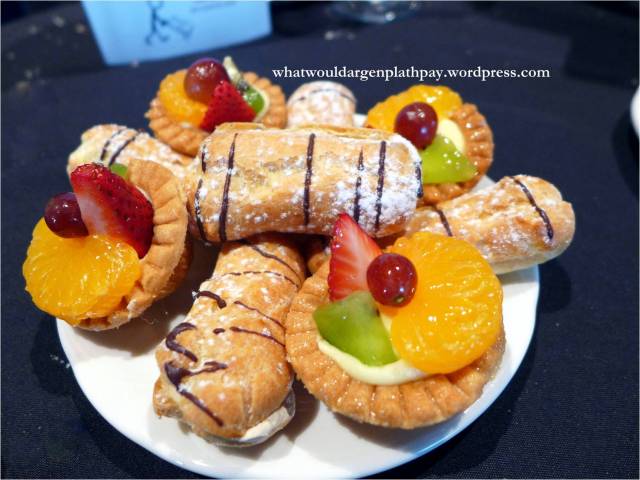 The chocolate cake with citrus and coffee cream was another dessert that we didn’t love, mainly because of the citrus layer at the top. Normally I don’t have anything against chocolate and citrus together, but I think the citrus layer really overwhelmed all the other flavors. Someone mentioned that it also tasted a bit artificial, which might have contributed to the strong flavor. 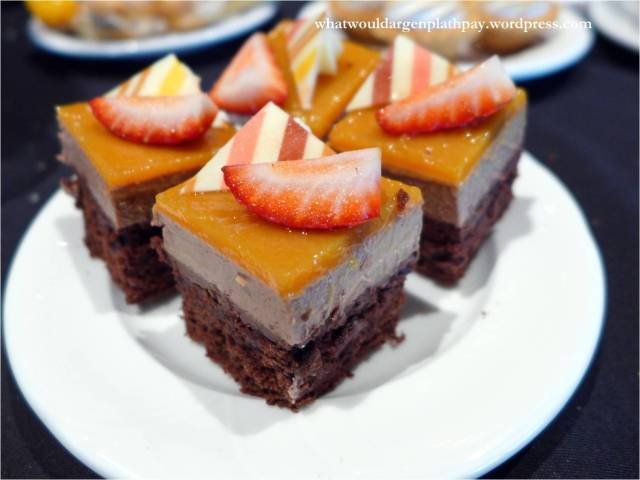 The presentation of the cheesecake was absolutely beautiful. I loved the dome shape and the tiny piece of edible gold leaf on this dessert. It was quite good albeit very rich! I think the richness of the cream cheese just made it too difficult for all of us to eat the entire thing. 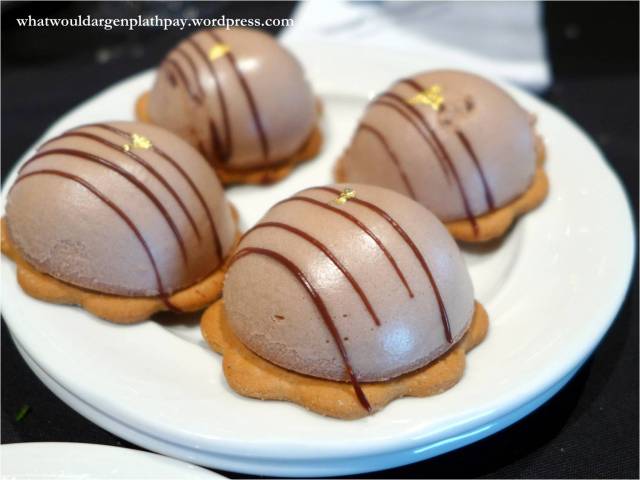 And finally, my favorite dessert of them all were the lemon meringue tarts. The lemon was tart but not overly tart and the meringue was gorgeous. I could probably eat one of these every day until the end of time and never get sick of them. 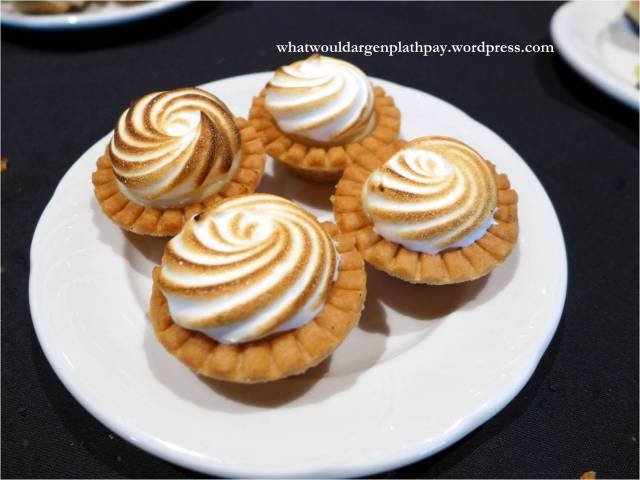 I technically didn’t pay for my Winefest tickets since JP was really lucky and won them from both the Edmonton Journal and Andrea’s contest, but tickets were on sale for $75 each. The sessions were 3 hours long and you got a Riedel wine glass to take home with you (lesson: it is super awkward carrying a lone, used wine glass on the LRT!).

Obviously, it was huge value for me since I didn’t have to pay for my ticket, but I think if you’re a wine drinker, it might be worth the $75 to attend the event and talk to people about their wines. We got a lot of information at the various booths about the wines and I even found a few new ones that I liked. A huge benefit is getting an opportunity to sample a wine you’ve wanted to try but didn’t want to risk purchasing a whole bottle of – after all, who really wants to finish a bottle of bad wine?

I had a great time at Winefest and I look forward to going back next year… possibly even only just for the food. :p

One thought on “Winefest Win”

Candied lichen... Who knew it would be something I would enjoy so much? I went on an @abontheplate dinner crawl with @lindork to check out their festival menu (runs Aug 6 - 15) and the sea buckthorn ice cream with birch syrup, saskatoon berries, candied lichen @thebutternuttree was a standout dessert for me!