I am so excited that Edmonton finally has an izakaya! What is an izakaya? The definition according to Wikipedia is a Japanese drinking establishment that serves food along with drinks. I love places where I can meet friends after work for snacks and drinks and I’ve been to izakayas in Vancouver but I’ve always wished there was one in Edmonton – with the opening of Izakaya Tomo, my wish has been granted.

I met up with a few friends for dinner at Izakaya Tomo on a Friday night and I was glad JP was early so that he was able to grab a table – we got there around 6:15 and there were seats available but once 6:30 rolled around, the place was packed and there was a line of people waiting, so if you’re popping in for a visit, definitely consider making a reservation or going in a bit earlier.

When we walked into the door, we were greeted with shouts of welcome (just like other izakayas!) and also thanked when we left. There is something about that acknowledgement by all the staff that makes the izakaya feel so welcoming and awesome. I didn’t get a chance to snap a photo of the interior but I didn’t see any chairs, but rather benches for seating at the tables. It certainly saves some space but it was a bit awkward finding somewhere to put our coats (there are boxes provided to stash your coat but not at every table). That’s not really a big deal though, we just squished ours onto one end of our bench.

There were five of us and none of us had eaten much before meeting up at Izakaya Tomo so we pretty much ate our way through a large portion of the menu. We did two rounds of ordering plus desserts so we were comfortably full when we left!

We started off with the classic seaweed salad and we really love this dish so we ended with 4 orders of it (I really need to learn how to make this). The seaweed salad at Izakaya Tomo had a great balance of acidity and sweetness – it was one of the better versions I’ve had. We also tried the kinpira which is stirfried burdock root and carrots. None of us had tried burdock root before and had no expectations but it was good, although it reminded me a lot of the leftover ingredients after making Chinese soups. The kinpira is not one of my favorites but it’s worth a try if you’ve never had burdock root before (just of the sake of trying it).

No visit to a Japanese restaurant complete without an order (or two) of deep fried tofu (agedashi tofu). Izakaya Tomo’s version was lovely and I really enjoyed it. I don’t know why but I cannot get the combination of the crispy outside and soft tofu inside right at home, but maybe one day…

One of the highlights for me was the takoyaki (octopus balls) and bonito flakes. You can barely see the takoyaki under the huge mass of bonito flakes! I love takoyaki with their soft squishy dough and that lovely nugget of octopus inside… It is one of my favorite street foods EVER but not always easy to find in Edmonton (I have occasionally found frozen versions in T&T). Even A. who is not a fan of seafood tried the takoyaki and said it was pretty good.

We did order California rolls because A. wasn’t feeling too carnivorous, but these were ok. I probably wouldn’t recommend going to Izakaya Tomo for the California rolls – not when there are so many better options on the menu. Although I will be honest – I don’t normally recommend California rolls in general unless you’re desperate for some fake crab?

The chicken nanban was quite delicious! I am obsessed with lotus root chips so I was very excited to see that as a garnish on this dish. Everyone at the table enjoyed it and said they would definitely order this again.

The pork shoga yaki was enjoyable but not anything you really wanted to write home about. To be honest, it kind of blended into all the dishes we were eating and I completely forgot we even had this. So I guess you can take that as not mind blowing but also not bad (I would remember very clearly either way). 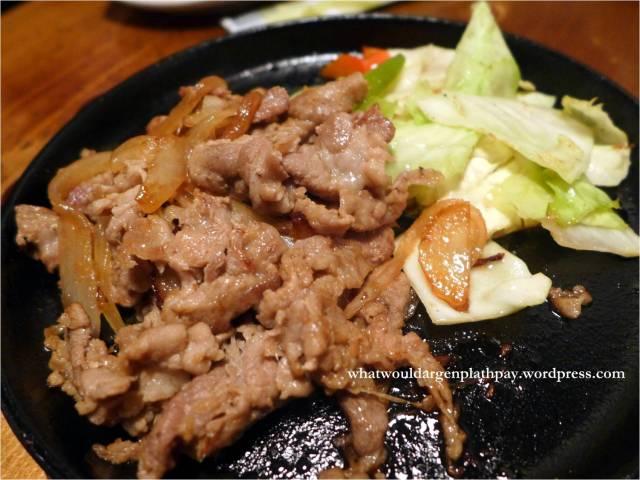 A friend recommended that we try the simmered pork belly and I found it reminded me a bit of the Chinese style beef brisket my Mom makes in terms of texture. It was very easy to shred and tasty but sadly there wasn’t much in a single order (2-3 pieces) so we all only got a tiny bite. While it was very good, I don’t know if the portion size is worth the price.

In addition to all the smaller tapas style plates, we also ordered a variety of udons and rice, which were a bit larger. First up was the curry udon and on a cold-ish day, this was perfection. You get that hint of sweetness you can only get from the Japanese curry and an amazing udon-y texture. This was probably my favorite out of all the udon dishes we ordered. This dish was almost pure comfort food for me.

The Udon Aglio e Olio Peperoncino was an unexpected hit for us because none of us were really sure what to expect from this dish. The texture of the udon was again great and the flavor of the dish was very well balanced with the squid and octopus not being chewy at all. It was definitely a different take on how we normally see and eat udon. I think it’s well worth a try!

The carbonara udon was another surprise for us and while I appreciated the effort on this dish, it was not my favorite, but I am not a fan of cream sauces on pasta so that affected my enjoyment of the dish (I’m a red sauce kind of girl). I can’t believe I am going to say this but I also found it too bacon-y (how can there be too much bacon?!?!) and I didn’t love this, although the noodle texture was still very good.

Our final carb dish was a fried rice with some bacon and egg and this is a dish my Mom likes to make on occasion and it is something I quite like. Again, I found the dish a bit too bacon-y (what is wrong with me?!) and overall it just didn’t do much for me but it was still relatively tasty. I probably wouldn’t order this one again, mainly because there are several other items I like better on the menu (more takoyaki!).

After all that savory food, you would think we wouldn’t have room for dessert but hahaha not only did we have room, we really went for it and ordered all four dessert options! First was the Ice Cream with Koku-to Umeshu, which came with the koku-to umeshu in a tiny little container so you can pour it on the ice cream. This was quite good and the ice cream was a great palate cleanser.

Our final dessert was the creme brulee with matcha. I am a huge fan of creme brulee and I always look forward to that extremely satisfying crack when I tap my spoon on the caramelized sugar. The Izakaya Tomo version was ok but I found the custard a touch too cold for my taste – maybe this just has to do with where the desserts are kept since all the other options are ice creams?

Overall, we had a great time at Izakaya Tomo and I really appreciated the opportunity to try such a huge section of their menu and I will definitely be back in the future. Although, I might just focus on coming later at night to snack instead of having a fuller meal, but for sure, I will be ordering takoyaki and curry udon (those were hands down my favorites of the night) again.

After all was said and done – our bill was pretty big at $169.37 + tip, but we did try out a lot of dishes and ordered multiples of others. In the end, it worked out to about $39/person and it was in no way an inexpensive dinner, but if you look at our bill break down below, no individual item is that expensive – we just had that much food! I am going to make a note and say I completely forgot to photograph the Chu-high with Calpico and the Oolong tea but JP enjoyed the chu-high a lot. Because an izakaya is mainly a pub, the oolong tea is actually not a hot pot of tea like I expected but rather tea in a can so just be aware of that and maybe order sake instead.

Here is our bill breakdown (it’s a long one!):

I would say Izakaya Tomo is definitely worth a visit – maybe just go for snacks or apps instead of a full meal because if you order family style with many people, it can be difficult to gauge how much food you need to get and you can easily go overboard (maybe we’re exhibit A?). However, I think that if it was just 2 people, you could get away with feeling comfortably full with less food and a much lower total per person, but you just wouldn’t get the awesome option of nearly ordering the whole menu like we did.

2 thoughts on “(Over)Indulged at Izakaya Tomo”