Let’s start this post off with a disclaimer: I got a message from the owners of BurgerWorks asking me to mention their new promotion on the WWAP blog and I felt that it is not my style to just talk about the promo, so I decided to pop in for lunch and combine a review with more details about the promotion. I did not get paid ( in cash or food) for this review/promotion mention and all opinions in this post are my own. (EDIT: Sadly BurgerWorks is now closed)

Now that we’ve taken care of the disclaimer, let’s talk about the food. BurgerWorks is a (now) locally owned restaurant out in Sherwood Park. It used to be known as Fulton Market Burgers so some of you might remember it as such. BurgerWorks’ slogan is “Gourmet Your Way” so you have a lot of opportunities to create your own signature burger.

When you arrive at BurgerWorks you will see a bunch of these nifty order sheets that you can fill out. On one side, you can create your  own burger from scratch or if you’re not in the mood to be creative, you can flip the page over and just choose a BurgerWorks signature burger (someone else has already done all the creative food thinking!)

BurgerWorks – Create your own burger options! 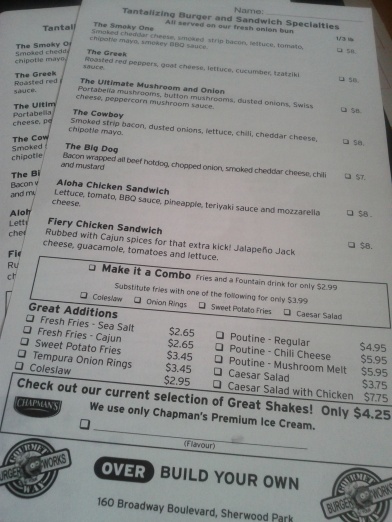 This isn’t my first time at BurgerWorks (I did go a few times when it was known as Fulton Market) and I decided to drag Argenplath Mama out for lunch with me. We created our own burgers and apparently simple burgers is a family trait as we had pretty simple burgers/toppings. Argenplath Mama went with a 1/3lb burger on an onion bun with lettuce, tomatoes, pickles and some dijon mustard and I got a bison burger with corn relish, cucumbers, lettuce, teriyaki sauce and smoked cheddar on a whole wheat bun. I also added onion rings to my order because I remember them being awesome. 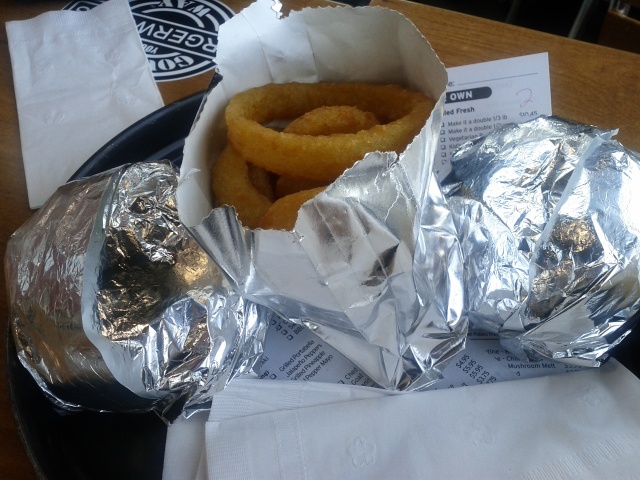 After ordering at the counter, we grabbed our drinks and scouted for a good seat (I want natural light!) while we waited for someone to bring out our order. Unfortunately Argenplath Mama did not let me take a photo of her burger as she wanted to eat it “before it got cold” but I did snap a (several) shot of my order along with some of my onion rings. 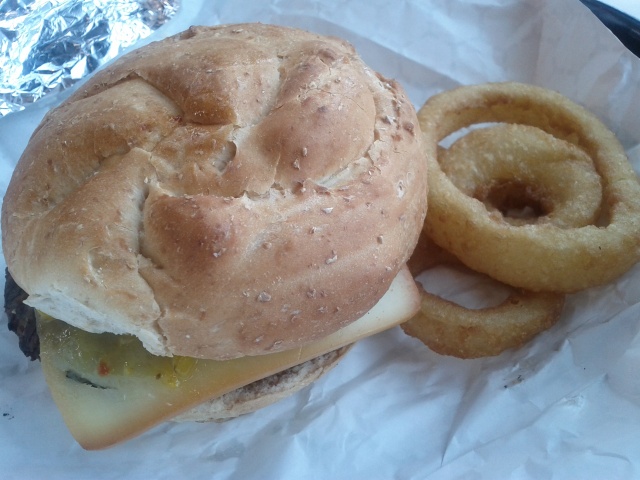 That’s looking pretty delicious right? I enjoyed my burger a lot and it was actually too big for me to finish! I ate about half before finally deciding to give up on the bread and just eat the expensive part (aka the bison). The onion rings still rank pretty high on my tasty onion rings scale. I really like them because they have a good balance between the batter and onion. It’s not too thick but also not falling apart because it’s too thin, so it’s worth getting over french fries. I would say that BurgerWorks makes some good burgers – of course Argenplath Mama thinks hers are better and hers are definitely pretty stellar, but if I wanted a burger without all the effort, I would consider driving out to Sherwood Park and visiting BurgerWorks.

Now what about that promotion I started off talking about?

BurgerWorks is a running a promotion for first-time visitors until November 30, 2012. If it’s your first time to BurgerWorks, just let them know and they will take down your name and id and then hook you up with a 25% discount on your order. If you’ve been to BurgerWorks before, just bring along a first time friend and you can get 25% off too!

So my lunch with Argenplath Mama came out to $21.43 + tax and tip (guess who forgot to mention the first timer discount – talk about a WWAP fail!).

My portion of the meal was definitely the bigger half as I got a combo and cheese ($0.99) on my bison burger. I would estimate a combo would range between $13-$15 depending on what you get on your burger and the type of side you get. Mine was $13.23+tax and Mama’s total was $8.20+tax.

If I remembered to get my 25% off discount, we would have only paid ~$16 which would have been $8/person instead of the $10.70/person we paid. In the end, still a pretty good deal (I was so full and took my onion rings home), but definitely better if you go before November 30, 2012 as or with a first timer and get the 25% off!

2 thoughts on “Burgers (my way) at BurgerWorks”

Does soup season start with the official start of fall or when fall weather hits?🤔