It’s Monday. Seriously I hate Mondays with a passion – probably because it is yet another reminder that I haven’t accomplished everything that I meant to do the week before. I think this is why my body loves to get sick on Sunday night/Monday morning – I mean I get that it’s trying to be helpful and all but that means I have to spend the whole day feeling gross. I would however rather face Monday than be sick (please take notes body). This Monday is particularly awful since we had to time change on Sunday and I hate when I magically (or not so magically) lose an hour of my life due to some arbitrary decision someone else makes (I want to lose time on my own terms!) – Props to Saskatchewan for laughing in the face of time change.

So what can make the Monday Blues go away? A new(ish) purse and shoes! I do love my accessories…

What makes these two items so awesome? Well for one, if anyone ever asks me what my least favorite colour is, the answer would be anything pastel (that’s a whole other rant. ugh.) and blue. So the fact that these are making me re-think my 18 year hate on for anything blue is pretty fabulous and deserving of it’s own post. Hmmm also contributes to the theme of things I apparently dislike…

Let’s start with my new Christopher Kon co-lab purse that I picked up from Miss Boss on 124 street. Actually let’s back track for a second so I can proclaim my love for this store. Miss Boss is pretty tiny but they carry a fantastic collection of bags that not many people have. My introduction to Miss Boss was during Western Canada Fashion Week back in 2010 where I stopped by the booth and picked up a gorgeous Big Buddha purse (took me a while before I realized it was Vegan too!) and I’ve been back a few times to buy gifts for others and myself – I’ve even gone in blizzard-y conditions (I’m hardcore like that?).

My poor Big Buddha purse is starting to look a little banged up and I’ve been thinking of temporarily retiring it so it can be there for me in its old age, hence a half-hearted search for a new bag. My meeting with this co-lab purse was entirely serendipitous as I was heading into dinner at the pop-up restaurant next door when I saw it in the window. Luckily it was 15 minutes before closing time and I snuck in for a quick peek before falling a little bit in love. 5 minutes later, I was taking this purse home – I don’t think anything would have stopped me from buying it. 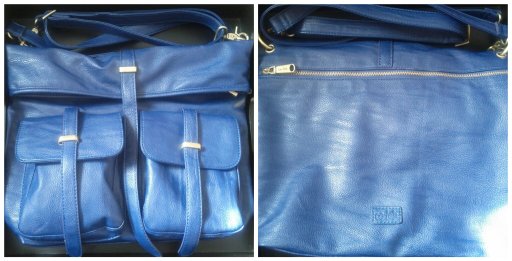 I don’t know that the photo really captures the beauty of this bag but it’s close enough (trust me I took a lot of photos of it). It’s a gorgeous cobalt blue (and despite the silver looking hardware, its definitely brass coloured), which is one of the trends for this spring and brings a pop of colour into my mainly black wardrobe. It comes with two straps so you can use it as a cross body bag or just sling it over your shoulder. I’ve been taking it to meetings with me and have been impressed with the amount of paper that it can hold without feeling like you’re pushing it to the limits (8.5″x11″ sheets fit perfectly if you put it in landscape side down). I use this as a light work/school purse and love that the style is reminiscent of old school book bags. The pockets in the front are great for carrying all the tiny things you normally throw to the bottom of your purse and spend forever digging for (i.e. chapstick, bus pass, pill case, hand cream, keys). Huge bonus is that I haven’t seen this in other stores and Miss Boss only ordered 2 in the blue so the chances of running into someone with my purse is slim to none!

Speaking of owning things that almost no one else will have – I bought these shoes at a vintage pop up store (also on 124 street) so there should be no way that I would clash shoes with someone else.

These shoes have everything that I love: a heel, pointed toe and bows. I am extremely drawn to bows on shoes, but especially ones on the back because they’re just so cute and slightly sassy. I adore the dark green of the shoe and the front gives you the impression that they’re a little boring and sedate and then you turn around and BAM! a shot of blue with bows… one of my favorite things is the conversation a pair of cute shoes can start. I’ve become such good friends with people who have amazing shoes because they wore something that was so awesome that I was compelled to sidle over and say “hey, I love your shoes…” (but not in a creepy way). Now if I know I’m heading into a room with lots of strangers, I literally put my best foot forward and try to wear something that has a little surprise (like the blue bow here) or is just so ridiculously fabulous that people want to talk to me about my shoes, although winter is sometimes iffy since my boots are basic black and it’s hard to deviate from that when it’s so dirty and gross outside.

Generally when I go shopping, I follow the “I like it $x worth” rule, which means if whatever I’m eyeing cost more than $x, it’s not coming home with me. I like to state out loud “I like it $x worth” before I look at the price tag so then it’s harder to take back once you find out how much it really is (your friends can give you a judge-y face when you waffle and almost pay more than what you said you were willing to) plus it’s harder to cheat and readjust your $x value if you don’t look at the tag first. So when I fell in love with my co-lab bag, I had firmly decided that I liked it at about $100 + tax and when I found out it was $95 + tax, I nearly shed tears of joy. I really loved it and didn’t want to be that person who wavered in the face of temptation.

The shoes were another story, there was a huge sign hanging that said all shoes were $30 so there was no way to play the “I like it $x worth” game. This is a situation where you have to stop and really think whether or not you’re willing to pay the price the store is asking. I carried those shoes around for a bit and picked up other ones and after wearing them and holding them, I decided that I did like them at $30 and now they’re sitting on a shelf just waiting for spring to come.

There are of course exceptions to the “I like it $x worth” rule and sometimes you just love something so much that you have to have it. That has happened to me more times than I can count but the rule is really great for stuff you like and not love. I’ve gone back to stores the next day or even 6 weeks later to buy things I’ve left behind because of the rule but in the end realized that we were meant to be together despite how much more they cost above $x (that’s a sign of true love). However, never ever would I encourage a WWAP disciple to go into major debt to buy something they “love” – sometimes fate and bankruptcy can get in the way of love (As Lysander says: “the course of true love never did run smooth” – A Midsummer’s Night Dream, I.i). True love is affordable and brings happiness, not misery and foreclosure.