I have been on a dumplings kick ever since the idea of #yegdumplings night popped up over twitter – who doesn’t love stuff stuffed into a wrapper of some sort? The idea was that everyone would produce a dumpling and bring it along to the party, but once the plan changed to bring a dumpling per two people, I convinced my pal A. to come to the party and do most of the work as we made vareniky (vereniki? spelling is apparently country dependent). Good times were had at the dumplings party hosted by Carmen over at Food Karma Blog and I was way too busy eating delicious dumplings to remember to take photos. Luckily, Carmen has a great summary post of the night so I direct you over to her blog to check out the action.

So why am I posting about dumplings when it sounds like I didn’t do much but hang out and eat? Because prior to the aforementioned plan change, I thought I would have to bring my own dumplings and bringing frozen pre-made dumplings to a foodie party probably guarantees never getting invited again. So as a non-cooking type person (knives and flame – essential to the cooking process but oh so scary to me), I had to scramble and figure out how on earth you make a (good tasting) dumpling? That is where my Mom comes in (what a good sport she is) – I demanded we make dumplings so I could learn and create semi-exact measurements for the future (a little of this is not very exact!). So without further adieu, I present to you: 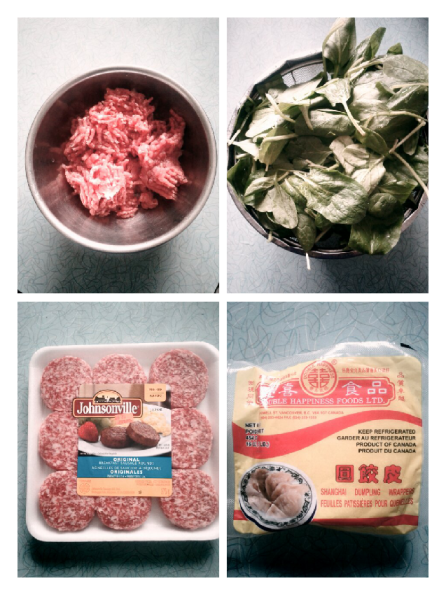 To cook: Just heat up a pan with some oil and brown all the dumpling sides. Once all the sides are brown, pour in a smidge (~1 tbsp) of water and cover your dumplings. Wait until the water evaporates and check if the dumpling is cooked (I just cut one of them open and look for pinkness). If it’s still pink(ish) repeat with the water and covering/evaporating until cooked. 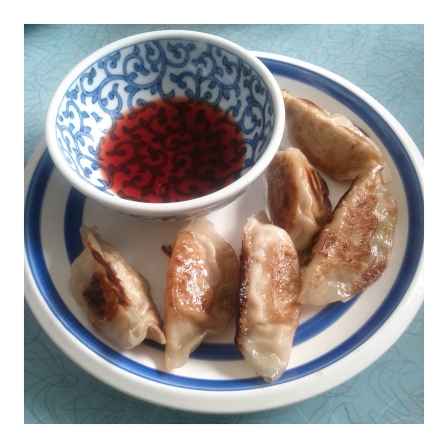 Dumplings with some soy sauce and vinegar. Yum!

Looks good right? This is why even after an epic dumplings party – I had more dumplings for lunch. You can put in whatever filling you want, I have used leftover crab and mixed it with pork, other veggies and pork, only veggies, and you can use other meats like beef or chicken too (I haven’t done it yet but maybe soon). There are even kimchi flavored dumplings out in stores so if you’re feeling ambitious – make some kimchi and toss it into a wrapper!

There are so many dumplings out there in the world, but on average I find I pay ~$6-10 for 6 dumplings depending on what they are filled with and how classy the restaurant is. You could seriously make 50 or so dumplings with <$10 on your own – this is where Mama’s grind your own pork thing really comes in handy since she breaks down some massive piece of pork that she gets on sale and uses parts of it for pork chops or other tasty pork goodness and then grounds some for dumplings.

I know you can get frozen dumplings for cheaper at the store but home made is totally the way to go – everything is fresh, way better tasting and most importantly you know exactly what went into making this pocket of deliciousness! Plus customization is pretty great.

So making your own dumplings – a definite win in the WWAP manual. It doesn’t take a lot of time (<1 hour) and you too can be eating dumplings for lunch over and over again OR bringing it along to an awesome dumplings party (just don’t forget to invite me!).