When I heard that China Glaze was coming out with a ‘Hunger Games’ nail polish collection, I hit the internet and started looking for swatches from people who were lucky enough to get a preview. I did find swatches on All Lacquered Up and proceeded to fall in love with a few of the colours: Fast Track, Harvest Moon, Smoke and Ashes, and Stone Cold. I pre-ordered these wonderful bottles of awesomeness from Nail Polish Canada and waited for my trusty mailman to deliver them.

I did my own swatches as soon as I ripped open the package but not before taking a picture of the gang together. 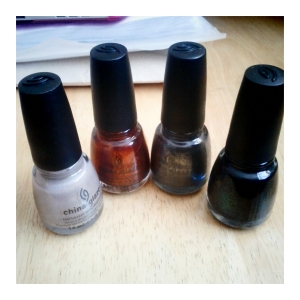 Now for the fun stuff: Swatches!

Starting off with the lightest colour of the bunch. I normally don’t like light colours because they just look weird on me and they don’t really get as many compliments as a fun colour, but I thought I would expand my horizons. As you can see – this is a super nude polish but it has these beautiful gold flecks in that catch the light. I thought this would be more pink but I am glad that is it more beige-y than expected! Thumbs up for a great nude colour. 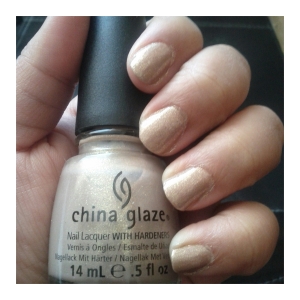 Swatch 2 is the copper-y Harvest Moon, which is quite lovely and goes on super smoothly. This is a colour that will get noticed (my favorite kind) since it really does look fantastic in the light. 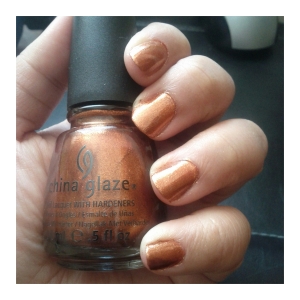 My favorite colour of the bunch is swatch 3: Stone cold. This is a matte grey with silver flecks in it, which makes me think of the number 2 pencils from my childhood days. I played around with this one and made a small boo-boo with the nail polish remover on the ring finger, which led me to my next great idea. You can see where the polish remover touched, it’s way more silver than graphite so I think that you could probably tape it off and get a half moon manicure by gently brushing remover over the matte until you hit silver. Or you could just slap some shiny top coat over it and hope nobody notices your cuticle area.  This also looks amazing with a top coat on, so bang for your buck with this polish (3 potential looks for the price of one!). 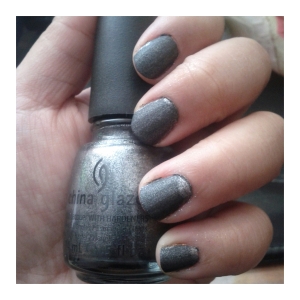 Finally, the last swatch of the day: Smoke and Ashes. In the bottle it looks like a sparkly black polish, but imagine my surprise when I put it on and it was a super dark green! It doesn’t show that well in the picture but it is really nice and depending on how you wave your hands at people, the green does come through. 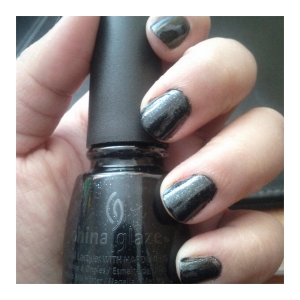 Each one of the polishes was $7.75+tax (x4), so I paid a total of $32.55 for these. Nail Polish Canada offers free shipping over $29, which was what really convinced me that buying 4 was better than paying nearly the same price + shipping for 3. After all, you can never have enough nail polish and compared to hard core nail fanatics, I have a relatively teeny tiny collection (<40 polishes).

While I didn’t do any price comparisons in the city, I have paid roughly $8 for China Glaze polishes from a salon so I’m going with the assumption that you’re not going to find it for much cheaper anywhere else – plus it comes straight to your door and you save so much gas and frustration scouring the city for potentially sold out colours. AND you can hang out at home in your PJs stalking the mailman (not that I do that), but the option is there.

So definitely a good buy especially since every one of these colours will be making their way into my regular nail polish rotation and major bonus points for being part of the ‘Hunger Games’ franchise (I’m a huge fan!).

3 thoughts on “‘May The Odds Be Ever In Your Favor’: China Glaze Capitol Colors Collection”